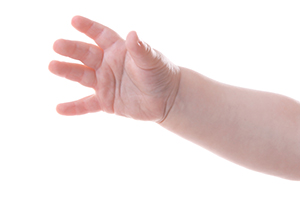 Erb's palsy is an injury to the arm which results from damage to the brachial plexus, the group of nerves which cluster near the shoulder. This condition is primarily characterized either by weakness or paralysis in the arm, depending on the severity of the case. As an injury which most often arises during delivery, your physician is responsible for recognizing risks and signs ahead of time, taking preventative measures, and exercising due caution and care before, during, and after delivery.

What Are the Symptoms of Erb's Palsy?

The general features and symptoms of Erb's Palsy should be instantly recognizable at birth - but determining the severity of these symptoms may not be possible for 3-6 months. In particular, in most cases, your physician should be able to notice the signs of the condition immediately or detect them through the standard reflex test and physical examination. If you have not received this diagnosis but believe your child may have Erb's Palsy, it is very important that you see a physician and receive a formal diagnosis and treatment for your child as soon as possible. Without treatment, symptoms will become more severe and are more likely to become permanent.

The most prominent general symptoms of Erb's Palsy are a weakness or numbness in the arm, accompanied by paralysis and nerve damage in more severe cases. Paralysis can be either temporary or permanent. It may resolve itself after several months, or require in-depth treatment. Nerve damage can range in severity from minor bruising to full tears. In mild cases (which are the majority), the symptoms may go away within a few weeks or a month, although many cases will take from six to twelve months to heal. More serious cases will require treatments like surgery or rehabilitation, and your child's symptoms may last for several years or longer.

In addition to weakness and/or paralysis in your child's arm, the primary symptoms of Erb's Palsy to look for are:

Immobility - If your child can't move their arm or shoulder, this may be a symptom of Erb's Palsy. Infants do not have a lot of control over their bodies, but typically do move their arms. Impaired mobility is usually observable shortly after birth, and is a common sign of the condition. Immobility may be mild or severe, and may commonly be observed in your child exhibiting difficulty in rotating their army away from their shoulder (similar to when you put your arm in a sleeve), difficulty bending their arm at the elbow, or difficulty extending their wrist. This is often accompanied by a loss of muscle control, and if the symptoms do not fade it will likely impair your child's crawling ability for some time.

Decreased reflexes - As the brachial plexus is responsible for both sensation and reflexes, if your child has Erb's Palsy they may not respond to touch as you'd expect in the affected area. The standard reflex responses may be weak or entirely absent.

Waiter's Tip posture - If your child's arm hangs loosely and is bent at the elbow, turned in, and held towards their body, while their hand is flexed back with its palm facing up and its wrist turned - this is known as the "Waiter's Tip" posture and is a classic sign of Erb's Palsy.

Pain - Another symptom of Erb's Palsy is pain, which can be irregular and/or intense. While usually occurring in the arm, it can also manifest in the shoulder. If your child lets out a high-pitched scream or cry when touched, and this gets worse when you touch their neck, arm, or shoulder, that is a strong sign that there may be damage to their brachial plexus.

Lack of feeling - Conversely, another possible symptom of Erb's Palsy is a lack of sensation or feeling altogether in the affected area. In this case, if your child doesn't react or notice things like a squeeze or a touch, this may be a sign of nerve damage. You can test whether this is the case by exposing your child to moderate heat or cold, or by giving your child a gentle pinch.

Decreased grip strength - This symptom is easy to identify by placing objects in both of your childs' hands and comparing. If one of your child's hands has only a light grip, or no grip at all, this may be a sign of Erb's Palsy.

Muscle Weakness/Stunted Growth - General muscle weakness (commonly known as atrophying) and/or a loss of muscle control is an important sign of Erb's Palsy to look out for. This may also be accompanied by stunted growth in the affected shoulder, arm, and/or hand, as Erb's Palsy can weaken the affected muscles in any of these ways.

Impaired Development - In general, any impaired circulatory, muscular, and/or nervous development may be a sign of Erb's Palsy. For example, your child may display an inability to regulate their arm temperature due to impaired circulation, or exhibit an associated torticollis (wry neck) in which their head is tilted to one side and their face is turned to the look towards the other way. Your child's skin may also lose its ability to heal in the affected areas. In more severe cases, these impairments can include Horner's Syndrome, which is characterized by a constricted pupil and droopy eyelid.

In addition to being aware of the various possible symptoms of Erb's Palsy, you may also find it helpful to know about the four main types of the condition, which are typically classified in increasing severity in the following way: