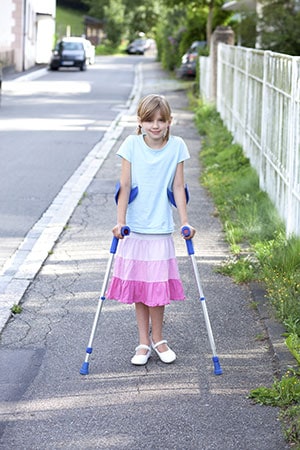 All of the specific movement disorders classified as "cerebral palsy" are initially caused by an injury to the developing brain (i.e. during pregnancy and childbirth). Sometimes this happens due to a lack of oxygen and blood flow to the baby's brain during childbirth, a frequent complaint in medical malpractice lawsuits. Neurologic injury to the brain during this stage has permanent consequences. It essentially creates a neurologic defect that disrupts the ability of the person's brain to properly control and direct the basic movement of muscles in specific areas.

Aside from this common point of origin, each type of cerebral palsy and each individual can exhibit a highly diverse array of clinical symptoms and levels of severity. All of the symptoms of cerebral palsy, however, are caused by a brain injury and involve the muscles and movement. CP is generally classified into 4 accepted sub-types: (1) ataxic; (2) dyskinetic; (3) spastic; and (4) mixed. This page will examine the nature and characteristics of spastic cerebral palsy. For more information about the 4 sub-types, visit our page on Classifications of Cerebral Palsy.

What is Spastic Cerebral Palsy?

Spastic CP (sometimes described clinically as "spasticity") is by far the most common form of cerebral palsy. According to some research estimates, spastic CP accounts for 70% to 80% of all diagnosed cases of cerebral palsy. The distinct clinical symptom that defines spastic CP is hypertonia. Hypertonia is extreme and involuntary stiffness and rigidity of opposing muscles.

Individuals with spastic CP are afflicted with disabling hypertonia in particular parts of their bodies. The opposing muscle sets in the area of the body affected by hypertonia are extremely tight. They tend to freeze up and become rigid when attempting to move. For example, if a child with spastic CP attempts to move their legs to walk, their legs will lock up as the muscles become rigid and oppose each other. This disabling spasticity in the muscles is the result of scrambled, abnormal control signals from the individual's brain.

The human brain is supposed to direct, coordinate, and control every single movement of the body. Everything we do with our body, from writing or raising an arm to more complex movements such as running or walking, is operated and controlled by our brain through impulse signals delivered over a complex network of nerve channels. To execute just about any movement, the body requires cooperative coordination between the muscles involved.

When an individual has this form of cerebral palsy, their brain is similar to a traffic light that gives green signals to opposing muscles at the same time. Instead of a coordinated movement, the opposing muscles lock like gridlocked traffic. The result is very stiff, difficult, and rigid body movements. The individual may have increased muscle tone in some areas and reduced muscle tone in others due to their spasticity and abnormal movements.