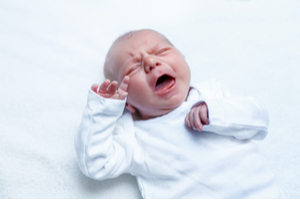 Sandifer syndrome is a movement disorder that affects infants. Babies with Sandifer syndrome twist and arch their backs and throw their heads back. These strange postures are brief and sudden. They commonly occur after the baby eats. Symptoms usually resolve within before the baby turns two.

Sandifer syndrome is thought to be rare. Researchers cannot approximately how many people have the condition. There are two reasons why that number remains elusive. First, Sandifer syndrome is frequently misdiagnosed because so many of the the symptoms are markers for other conditions. Symptoms can resemble seizures, infantile spasms, infant torticollis, a muscular condition, and paroxysmal dystonia, another movement disorder that also sees attacks of abnormal posturing. When you combine non-specific symptoms with a relatively rare condition, you will get a lot of misdiagnosed cases.

What Are the Symptoms of Sandifer Syndrome?

In a typical attack of Sandifer syndrome, a baby's back will arch suddenly. With their back flexed, their head and legs also splay out backward. They become stiff. Other expressions of the syndrome include nodding head movements, twisting or tilting of the head, or thrashing limbs. Many babies also exhibit involuntary eye movements.

During these episodes, babies may go quiet, as if they have suddenly entered a different state of mind. They may also appear uncomfortable or cry. Episodes normally last a minute or two but will recur up to ten times a day. The baby will stiffen, then relax, and then stiffen again, a pattern that resembles seizures.

Due to its relationship with gastroesophageal reflux disease, episodes of Sandifer syndrome most commonly occur after eating. They do not occur when the child is asleep.

Hiatal hernias sometimes accompany Sandifer syndrome. A hernia happens when an organ pushes through an opening in its protective surroundings into an area it isn't supposed to be. With a hiatal hernia, the upper stomach pushes up through the hiatus, the opening between the esophagus and the stomach.

This can happen when the muscle is weakened due to an injury, aging, or strain. It is also possible to be born with an abnormally large hiatus. A hiatal hernia usually results in acid reflux, which, again, is related to the development of Sandifer syndrome.

It has been shown that there is an association between the occurrence of reflux and the occurrence of Sandifer symptoms.[1] Researchers hypothesize that contorted postures might be the Sandifer baby's pathological response to acid reflux. An arched and stretched position may relieve the pain and discomfort of the reflux.[2],[3]

Babies can get gastroesophageal reflux disease in the first place due to the immaturity of the muscle that prevents the stomach's contents from going up into the esophagus. The muscle relaxes when it should be tightly closed, causing heartburn and vomiting. A hiatal hernia, when the stomach pushes up into the chest cavity, can also cause reflux. Babies are more susceptible to reflux because they consume a liquid diet.

An allergy to cow's milk has also been linked to Sandifer's syndrome. Infants are exposed to cow's milk through breast milk and formula. (Milk protein allergy is also a differential diagnosis.) For infants who don't respond to normal treatment, a hypoallergenic formula might be the answer.[4]

Who Is Affected by Sandifer Syndrome?

Infants make up the majority of people affected by Sandifer syndrome. Most infants, after being treated for gastroesophageal reflux disease, no longer experience symptoms.

However, when Sandifer syndrome persists as a child grows older, their symptoms are likely linked to another neurological or movement condition. This is a condition you want to diagnose as soon as possible.

How Is Sandifer Syndrome Diagnosed?

To diagnose Sandifer syndrome, a doctor will ask about your baby's behavior and perform a physical exam. An MII test (multichannel intraluminal impedance) test measures the flow of fluids, air, and solids in the esophagus. Doctors do this test, along with pH testing, using a catheter probe in order to diagnose gastroesophageal reflux.

The doctor may also perform tests to rule out other conditions. For example, a CT scan will reveal any muscle abnormalities and video-EEG monitoring will show any seizure activity.

Misdiagnosis can happen when the baby only has mild symptoms, or no outward symptoms at all, of gastroesophageal reflux disease. In the absence of those symptoms, a doctor may attribute the baby's abnormal postures to another cause.

Furthermore, postures and movements are not consistent across cases. Some babies may arch their back while others tilt their necks, for example, making it difficult to recognize Sandifer syndrome.

Incorrect diagnoses are harmful because they subject the baby to unnecessary testing and medication that can have unsafe side effects. This is not only expensive and emotionally taxing for parents but also deprives the baby of effective treatment.

How Is Sandifer Syndrome Treated?

Most of the time, Sandifer syndrome goes away within the first two years of a baby's life. Given the link to gastroesophageal reflux disease, treatment revolves around treating the reflux itself. This can include changes to the baby's diet and eating habits, medication, and surgery. Addressing gastroesophageal reflux disease eliminates the symptoms of Sandifer syndrome.

Parents can feed their baby less food more frequently and thicken their food with cereal. They can also keep their baby in an upright position after eating. Gravity will help keep the contents of their stomach from coming up into the esophagus. Babies also benefit from time spent playing on their stomach, under close supervision, in order to promote the healthy development of muscles and movement.

There are several categories of medications used to treat gastroesophageal reflux disease. Antacids neutralize stomach acid in order to reduce the burning feeling of heartburn and the pressure of indigestion. Other drugs decrease the amount of stomach acid that the body can produce.

Rarely, surgery is required to improve gastroesophageal reflux. A surgery called "fundoplication" is available to patients who do not respond to lifestyle changes or medication. In fundoplication surgery, the top of the stomach is wrapped around the bottom of the esophagus.

Suturing the stomach around the esophagus tightens the opening between the two organs, preventing the contents of the stomach from moving up into the esophagus. Surgery is sometimes needed to repair a hiatal hernia, which can be done at the same time as the fundoplication.

It is not a procedure you wanted performed on your child unless it is absolutely necessary. Still, this surgery has a high rate of satisfaction, resulting in a good outlook for patients with Sandifer syndrome.

"Diagnosis and management of Sandifer syndrome in children with intractable neurological symptoms" by Irina Mindlina, European Journal of Pediatrics, 2020