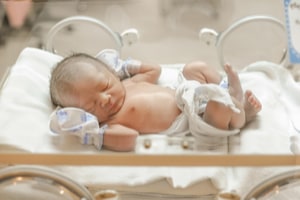 The normal length of fetal gestation / pregnancy is 40 weeks. Anytime a baby is born prior to the end of the 37th week of pregnancy they are classified as premature (commonly called "preemies"). Premature birth significantly increases a baby's risk for health complications, birth injuries and almost everything else bad. The more premature a baby is the more at risk they are.

Premature babies are much more likely to have perinatal and neonatal birth injuries and health complications. There are 2 primary reasons for this. First, when a baby is born prematurely it often means that something went wrong during the pregnancy which triggered the early birth or forced doctors to induce it. The second reason is that when a baby is born too early their bodies are not fully developed which leaves them at risk for just about every possible neonatal health risk. Below are the most common complications and health risks associated with prematurity: