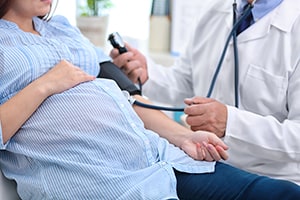 Preeclampsia is a maternal health condition that sometimes occurs in expecting mothers in the later stages of pregnancy. Most women manage preeclampsia quite well.  But it creates an increased risk of birth injury, newborn illness, and even fetal and maternal death.

Preeclampsia and related hypertensive disorders during pregnancy cause 500,000 infant fatalities during childbirth annually.  So if you have preeclampsia, alarm bells should be going off with your obstetrician to be taking the necessary steps to manage the condition so both you and your child have a safe delivery.

How Common is Preeclampsia?

Preeclampsia almost always occurs sometime after week 20 of the pregnancy, with most cases developing during the middle or end of the 3rd trimester. What happens is the preeclampsia causes the blood vessels to constrict. The result is high blood pressure and a reduced blood flow that can affect organs in the mother's body, including her liver, kidneys, and brain. The mother also faces higher future risk of coronary artery disease.

The diagnosis of preeclampsia is presumed if there is eclampsia, even where signs and symptoms of preeclampsia go undiagnosed before the onset of seizures.  Preeclampsia causes concern because it increases the risk of fetal injury and complications for the mother.  So it is important that the doctor catches the symptoms and treatment begins promptly.

The exact physiological causes of preeclampsia are still not fully understood. Research into the underlying cause of preeclampsia is still ongoing but we still only have unproven theories.

The most accepted theory focuses on the placenta and suggests that preeclampsia develops in 2 stages. In the first stage, the placenta produces certain excess proteins that get released into the mother's system.

Although researchers have a good idea of how and why these antiangiogenic trigger preeclampsia, what is less understood is why the placenta of certain pregnant mothers overproduces these proteins.

We do know is that placental factors are believed to be the cause of preeclampsia. How do we know this? Delivery of the placenta will resolve the maternal symptoms of the disease. So the treatment for pre-eclampsia is delivery of the baby and all products of conception. Until that is done, the preeclampsia will not resolve.

Signs and Symptoms of Preeclampsia

The characteristic symptoms of preeclampsia are maternal hypertension (high blood pressure) and high protein levels in the urine which are triggered by changes in the body during pregnancy.

But these symptoms are harbingers of preeclampsia, not the causes of the syndrome. Preeclampsia is likely caused by from abnormalities in the placenta that feeds the fetus with blood and oxygen.  Adequate blood supply is critical for fetal health.

These placental abnormalities often develop in the very early stages of pregnancy, when the vasculature of the placenta is still inchoate. Preeclampsia symptoms also include swelling and rapid weight gain.

The earlier symptoms and indicators of preeclampsia can often be difficult for many pregnant women to recognize themselves because they are often subtle (elevated blood pressure). Other more noticeable symptoms such as swelling can be caused by a number of other things during pregnancy, making it difficult to distinguish between normal body changes during pregnancy and potential red flags. Most cases of preeclampsia are diagnosed by doctors during prenatal care visits.

The primary measurable signs and symptoms of preeclampsia are:

What can you do about preeclampsia? High-quality pre-natal care is critical to effective diagnosis and careful management of preeclampsia. Doctors need to ensure that appropriate consultation by specialists is performed and documented as to potential ongoing signs and symptoms of preeclampsia.

Otherwise, there is a foreseeable probability that ongoing and undertreated preeclampsia will progress to eclampsia and debilitating and/or fatal injury if not resolved. Accordingly, the standard of care is to have a low threshold for treatment and to treat promptly and aggressively, particularly in a patient with symptoms of severe preeclampsia.

Preeclampsia is being studied rigorously due to its status as one of the top health issues that affect mothers and babies. The biological mechanisms that underlie preeclampsia and the best tests to identify who is at risk for preeclampsia and related complications are some of the topics researchers are interested in clarifying. Some of these recent studies are listed below.