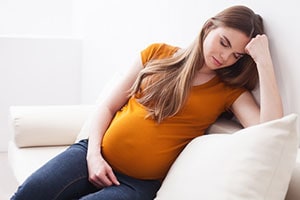 Placental abruption (also called "placenta abruptio") is an uncommon and potentially dangerous complication during pregnancy in which the placenta prematurely detaches from the uterus before birth.

The placenta is an organ that plays a critical role in pregnancy and gestation. The placenta is responsible for delivering nutrients from the mother to the baby during pregnancy. In a normal pregnancy, the placenta attaches to the upper part of the uterus and stays attached until the baby is delivered. The separation of the placenta from its site of implantation before the delivery of the fetus is called placental abruption.

What are the Symptoms of Placental Abruption?

Placental abruption's limitation of oxygen and nutrients is likely going to have an impact on the growth of the fetus. The size of the baby is testable. Placental abruption is the leading cause of fetal growth restriction (or IUGR). Sometimes, IUGR is misdiagnosed as "constitutionally small" which just means the child is little and healthy the way some adults are little and healthy. The key is for the obstetrician and the maternal-fetal medicine doctors to be able to distinguish between the two.

What are the Causes and Risk Factors of Placental Abruption?

In some cases, placental abruption is caused by bleeding resulting from some sort of abdominal trauma to the mother. Car accidents are a common cause of external trauma to a pregnant woman's abdomen.

How is Placental Abruption Diagnosed?

Placental abruption cannot be diagnosed definitively until after the baby is delivered and there are few markers for placental abruption, particularly in the first to trimesters. However, doctors will often suspect placental abruption and may have evidence to support that suspected diagnosis. Diagnostic testing for placental abruption usually starts with a physical examination of the mother followed by an ultrasound or sonogram imaging test. Blood work and fetal monitoring devices might also be used to gather information and decide on the most appropriate course of action.

What are the Treatment Options for Placental Abruption?

Just under half (48%) of placental abruptions are classified as "mild" in severity. Placental abruptions are considered mild when they involve limited vaginal bleeding Maternal heart rate and blood pressure remain stable will remain stable. Most importantly, there are no indications of fetal duress. For mild placental abruptions that occur before the 34th week of gestation, doctors will usually try to prolong the pregnancy as long as possible. Management will typically involve medication to prolong gestation and very close monitoring. Best rest or possibly hospital care is also standard. When a mild placental abruption occurs closer to the end of the pregnancy (after the 34th week), doctors will usually recommend delivering the baby right away. This will involve either an emergency C-section or inducing labor.

In 2020, this is a clinical trial to determine if azithromycin helps with pre-labor rupture of membranes. Doctors sometimes prescribe erythormycin which can be so brutal on a woman's stomach that she discontinues the use of the drug.