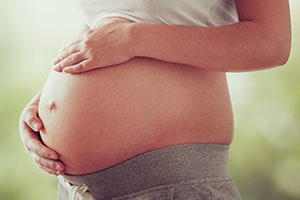 Many women have areas of scar tissue on the lining of their uterus as a result of a prior cesarean section (C-section) procedure. This is one of several reasons why a vaginal birth after a prior C-section (VBAC) is considered risky.

Other events that can potentially leave scar tissue include prior abortions or miscarriages, particularly when a dilation and curettage procedure was involved. Other factors which are known to increase the risk of placenta previa include carrying twins or multiples, maternal age over 35, and smoking during pregnancy.

Individual cases of placenta previa are classified based on severity and also based on the extent of cervical blockage:

Marginal: This is the least obstructive form of placenta previa which occurs when the placenta is positioned next to the cervix but is not actually covering the opening.

Partial: As the name implies, "partial" placenta previa occurs when the placenta is only partly blocking or covering the top of the cervical canal / cervix.

Complete: Complete placenta previa occurs when the entire top of the cervix is completely covered and blocked by the abnormally positioned placenta.

After initial diagnosis, the severity and classification of placenta previa can be confirmed with a high degree of accuracy with a transvaginal ultrasound.

The principal symptom of placenta previa is the sudden occurrence of vaginal bleeding. The bleeding typically occurs around the 32 week of pregnancy and often starts out light and gradually increases in volume. The bleeding can be sporadic in nature - occurring suddenly one day then going away only to come back the following week. Some women also experience cramping or abdominal discomfort. In some cases of placenta previa, however, the mother may never experience any vaginal bleeding until the very end of the pregnancy or when labor begins.

Treatment and Management of Placenta Previa

The way that doctors manage placenta previa has changed in the last 20 years. We now pretty much know if a woman has placenta previa. The path is an elective C-section before they go into labor to prevent any problems.

Unfortunately there is no safe and effective method of treatment to "fix" placenta previa. If the placenta is blocking the cervix there is no way for doctors to go in and move it out of the way. In any event, placenta previa is not something that necessarily disrupts the healthy growth of the baby. The placenta is often still functioning normally, it is just in the wrong location. Placenta previa is primarily a complication affecting vaginal delivery. When the placenta is blocking the cervix and birth canal, attempting a normal vaginal delivery can be dangerous for the baby.

Treatment of placenta previa generally consists of careful management. The best strategy for management of placenta previa will depend on a number of factors including: gestational age; the health of the baby; the extent and severity of any vaginal bleeding; and the exact position of the placenta and presentation of the baby (i.e., breach, head first, etc.). A planned C-section is typically the only option for delivery when the placenta is completely covering the cervix. If the baby is healthy and vaginal bleeding is not excessive, doctors will normally try to wait until at least week 36 of gestation before delivering via C-section. When vaginal bleeding is very severe, however, an immediate C-section may be required.

So the standard of care requires doctors to deal with this risk of the placenta impeding the baby coming through the birth canal. The goal of management for placenta previa is, of course, to obtain fetal maturation while minimizing the risk to both mother and unborn baby. If the pregnancy has reached 37 weeks or more at the time of initial bleeding, Cesarean delivery is indicated. Elective Cesarean section for placenta previa should be scheduled for 39 weeks. Cesarean delivery is also indicated for the laboring patient with placenta previa beyond 34 weeks' gestation.

For partial or marginal placenta previa cases (where the cervix is only partially covered), normal vaginal delivery may still be possible. Again the proper course of action will be dictated by the volume of any vaginal bleeding and the extent of the cervical obstruction. When doctors elect to hold off on delivery, mothers are often put on bed rest and advised to take other precautions. Additional treatment during a waiting period may include

As long as placenta previa is properly diagnosed and carefully managed, most babies can be safely delivered. However, placenta previa does increase the risk of a potentially bad outcome. Uncontrolled vaginal bleeding presents the most serious danger with placenta previa. If vaginal bleeding cannot be curtailed and/or handled with blood transfusions, doctors will have no choice but to immediately deliver the baby by C-section before gestation is complete. When babies are delivered prematurely many of their organs are underdeveloped which leaves them very vulnerable to a number of dangerous health conditions and complications.

How is placenta previa diagnosed?

Placenta previa is diagnosed based on ultrasound imaging and analysis which can show the abnormal positioning of the placenta. Timely and accurate diagnosis of placenta previa is very important to long term management.

What are the symptoms of placenta previa?

Chronic and irregular vaginal bleeding is the primary symptom associated with placenta previa and it usually begins around the 20th week of pregnancy. Placenta previa is otherwise painless and symptomless.

How is placenta previa treated?

What are the complications and risks of placenta previa?

Placenta previa is associated with a number of obstetric risks and complications including prematurity.

This article reported that placenta previa’s risk factors include prior abortions, smoking, male fetuses, assisted reproductive technology use, and C-sections.

This study found that major degree placenta previa, first bleeding episode within 29 weeks of gestation, and the admission hemoglobin levels were associated with higher rates of unplanned C-sections in mothers with placenta previa.

Ogawa, K., et al. (2022). Risk factors and clinical outcomes for placenta accreta spectrum with or without placenta previa. Archives of Gynecology and Obstetrics, 305(3), 607-615.

Xie, R., et al. (2021). Comparison of Adverse Maternal and Neonatal Outcomes in Women Affected by Placenta Previa With and Without a History of Cesarean Delivery: A Cohort Study. Journal of Obstetrics and Gynaecology Canada, 43(9), 1076-1082.

This study looked at the maternal and neonatal outcome differences in mothers with placenta previa with and without a C-section history. The researchers found that placenta previa with a prior C-section history increased the risk of uterine ruptures, placenta accreta and increta, shock, severe anemia, hysterectomies, significant bleeding, and high hospital costs. They also found that the two groups experienced no neonatal outcome differences.