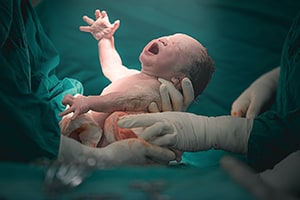 Periventricular Leukomalacia (PVL) is a unique type of injury to the brain which sometimes affects babies born prematurely. PVL occurs when the white matter in the ventricles of the brain becomes damaged or decayed. White matter is very important because it facilitates electrical impulse signals that the brain uses to control the rest of the body. The cellular decay of the white matter tissue creates voids or holes within the brain. These holes eventually fill up with fluid which results in the condition known as PVL. While there are many success stories, periventricular leukomalacia can result in permanent physical and mental disabilities and PVL is a primary cause of both cerebral palsy and epilepsy.

Interruption or restriction of blood flow around the ventricles of the developing brain of a fetus during gestation is believed to be one of the principal causes leading to PVL. In the early stages of pregnancy, the fetus and particularly its brain ventricles are especially vulnerable to injury or disruption of normal development. Any type of restriction or interruption of the supply of oxygenated blood from mother to baby and to the baby's brain during pregnancy can potentially damage white matter and result in PVL. Infections of the fetal membranes (chorioamnionitis) and other types of maternal infection are a common source of interruption to blood and oxygen flow.

PVL is typically present when the baby is born but a formal diagnosis is normally not made until months later. PVL symptoms will often be different in each child, but the most common universal symptoms of PVL include:

Clinical seizures are also a common symptom of PVL in some babies with more severe injury. Almost all of these common PVL symptoms happen to be common symptoms of other birth injuries which can make differential diagnosis hard.

Getting to a formal diagnosis of PVL can be a long and complicated process involving countless exams and diagnostic brain tests. A cranial ultrasound is often the first diagnostic imaging tool used in diagnosing PVL. This is similar to a pregnancy ultrasound but it is performed on the baby's head and gives doctors images of the brain. The image results of a cranial ultrasound analyzed to spot abnormalities associated with PVL. A Computed Tomography ("CT") scan and an MRI (Magnetic Resonance Imaging), are also used in the diagnosis of PVL.

The unfortunate reality is that there is currently no effective treatment available for PVL. Once the damage occurs, the decayed white matter in the brain will never regenerate and cannot be repaired or restored. Although PVL is a permanent injury, careful monitoring and effective management of the condition can help limit its long term effect and symptoms. Rehabilitative physical therapy and occupational therapy are typically utilized to help manage PVL. Medications can also be prescribed to address certain physical symptoms such as seizures.

PVL is not a progressive condition so its symptoms do not gradually worsen a child gets older. The damage to the white matter occurs during brain development and does not continue to expand after birth. Although not progressive, the physical symptoms of PVL usually become more and more noticeable as the child ages.