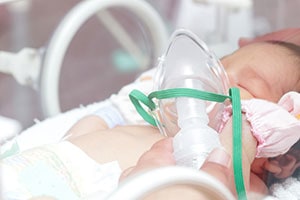 Oxygen is one of the key components that fuels human life. All of the cells and organs in the human body require a continuous, uninterrupted supply of oxygen to survive. In fact, the human body's need for oxygen starts even before birth at the earliest stages of fetal development and gestation. During pregnancy the unborn baby is dependent on the umbilical cord and placenta for oxygen delivery. When everything goes well during childbirth, the baby is delivered into the world and immediately starts breathing on its own without any assistance. This transition from intrauterine to extrauterine life is the final, critical stage of childbirth. Fortunately, the overwhelming majority of newborns (over 90%) complete this transition to independent breathing on their own without any assistance. However, 10% of newborns require some form of assistance to start breathing on their own and 1% require extensive medical intervention known as neonatal resuscitation.

What is Newborn Resuscitation?

Newborn or neonatal resuscitation refers to emergency medical intervention techniques employed immediately after childbirth to assist babies who are not able to breath independently after birth. Once a baby is born it is very important that they are able to start breathing on their own right away. If a newborn cannot being breathing independently right away they are at risk of birth asphyxia which can cause serious brain injury and even death.

When is Neonatal Resuscitation Necessary?

The overly simplistic answer to this question is that neonatal resuscitation is required when a newborn baby exhibits difficulty or inability to assume independent respiration after delivery. Normal independent breathing is something that doctors can usually just observe after the baby is delivered. There are other indicators and symptoms of respiratory difficulties (e.g., lack of normal vigorous crying; abnormal heart rate) but a doctor's simple observation of the baby taking in air and exhaling is the primary method of diagnosis. When abnormal breathing is observed after delivery, however, doctors will have a very short window of time to intervene to avoid harm to the baby. For this reason, early identification of various risk factors and being prepared in advance is almost more significant. Anticipating the potential need for neonatal resuscitation is often critical. When risk factors are identified in advance arrangements can be made in to have a neonatal resuscitation team in the delivery room and ready to step immediately intervene at the first sign of respiratory distress.

The leading risk factor for newborn respiratory problems is prematurity. During the final weeks and days of a full term pregnancy, complex physiologic changes take place to help prepare the baby's lungs and respiratory system for the final transition to independent breathing. In the last few days before spontaneous vaginal delivery, the baby's lung's start to produce less fluid in preparation for breathing. Contractions during vaginal delivery further help to expel fluid from the lungs. By the time of birth the lungs should be clear enough to begin breathing and within 6-10 hours after birth the fetal lung fluid should be completely cleared out. When a baby is born prematurely, however, these final lung preparations get interrupted making it much more likely that a premature baby will have difficult with respiration. Listed below are various other risk factors and symptoms associated with a need for neonatal resuscitation:

The American Academy of Pediatrics and other related organizations have adopted clear guidelines for procedures to follow in neonatal resuscitation. These guidelines typically form the basis of most newborn resuscitation efforts.

Step 1: The first step in neonatal resuscitation is the prevention of "cold stress." Cold stress is a process that occurs as a newborn baby rapidly loses body heat as it leaves the warm internal environment of the uterus. Cold stress can trigger vascular constriction and thereby complicate newborn respiratory problems. Cold stress is typically addressed by putting a warm hat over the baby's head and placing them under a radiant heat lamp.

Step 2: The second step in resuscitation efforts focuses on clearing baby's air pathways. Sometimes the baby's respiratory difficulties are caused by excessive fluid in the mouth, throat and nose. Removal of obstructive fluid from the baby's airways is done with either a bulb syringe or a suction catheter. The instruments are inserted into the block airway and used to basically suck up and clear away any free fluid. This process is called aspiration. The mouth is typically suctioned first to avoid any gagging that is often caused by aspiration of the nose. For the majority of newborns experiencing respiratory problems, neonatal resuscitation is complete after step 2 as no further intervention efforts are required. Therefore, after the first 2 steps are complete doctors will typically need to make an assessment of whether the baby is breathing normally and getting enough oxygen on their own. If this assessment indicates that the baby is still not breathing properly on their own, more significant resuscitation steps must be taken. Most newborn respiratory problems are resolved after these first 2 steps.

Step 3: the third step in neonatal resuscitation involves administration of oxygen and/or manual ventilation. Ventilation in this stage is normally provided with a bag-mask ventilator. The baby is moved to a neutral position to allow open airways and the proper size mask is fitted over their nose and mouse. The doctors will then compress the ventilation bag and monitor for normal chest rising. If the chest is rising normally when the bag is compressed it is an indication of air getting into the lungs. If this is not immediately successful, doctors will generally perform chest compressions with the ventilator.

Step 4: if a baby continues to show signs of respiratory distress after completing the first 3 resuscitation steps, the next option is to intubate. Intubation is a surgical procedure in which an endotracheal breathing tube is installed through the throat and attached to a mechanical ventilator. This is a difficult surgical procedure that requires an extremely high level of skill. Not all doctors are qualified to do this so it is very important to have someone available that is.