Bruising on a Newborn Child

Childbirth is a physically demanding and stressful process that often pushes the physical limits of both the mother and baby. Many newborns look like they have just been in a little fist fight when they first come out. Bruises on the head and face of a newborn baby are a common sight. In most cases, bruises on a newborn are nothing to worry about and they go away on their own within a few days.

Bruises occur when damaged blood vessels leave dark blood spots beneath the skin. New parents are understandably concerned when they see bruises on their baby. However, the odds are overwhelming positive that your baby is just fine. In some rare cases, infant bruises are among the earliest indications that a more severe injury occurred during childbirth.

Although bruises are a common consequence of childbirth, not all babies are born with bruises. If a newborn has extensive bruising, it is a clear indication that they endured a particularly stressful passage through the birth canal which caused birth trauma. Common sites include the head, neck, and shoulders. Infant bruises can be related to the following events and medical conditions:

Bruises may be confused with "mongolian spots," a type of grey-blue birthmark that usually fades within a few days of birth.
Bruises in Childhood 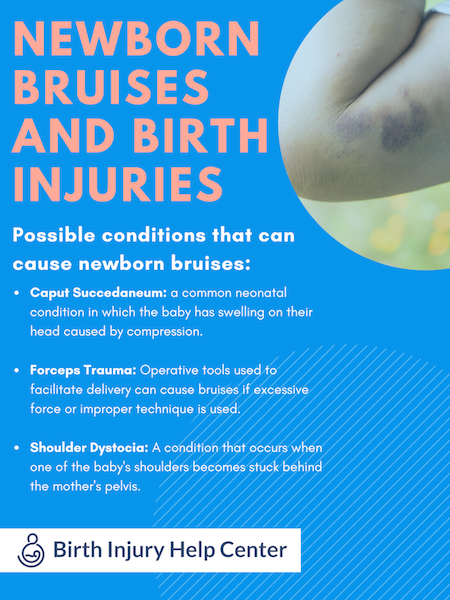 The focus of this post is bruises that could be harbingers of a birth injury. It is also important to underscore the importance of monitoring bruises in older children.

Bruises are a painful part of childhood. These minor injuries happen all the time from falls, accidents, and play. A rare condition that causes excessive bruising is hemophilia, also known as Factor VIII deficiency. People with hemophilia have difficulties forming blood clots, and bruise more easily than others. Idiopathic thrombocytopenic purpura (ITP) is another rare condition that limits the blood's ability to clot, leading to excessive bruising and bleeding.

But what should a parent do if they leave their child in the hands of a caregiver only to notice bruising that was not there previously? Most of us would assume that an accident occurred or a fall took place and think nothing of it. But when should a parent be concerned? In the following excerpt, we hope to paint a clearer picture of how to approach this difficult situation and what is considered to be abnormal.

First, talk with the caregiver and ask the following questions:

A caregiver shoulder be able to reliably explain what happened in a manner that makes logical sense. If the story does not quite add up, the injuries described don't reflect what is seen on the child, or you suspect any suppression of truth, continue to ask questions. These questions allow you to get a picture of what happened.

Next, consider taking your child aside to talk with them one on one. If your child is older than the age of 5, they are likely able to provide more information as to what happened. It is very important to interview and talk with your child away from the caregiver as this can potentially reveal more information that would otherwise have not been disclosed. If possible, have the child point to where it hurts on his/her body, ask yes or no questions, and watch their reaction to the questions. Look at their eye contact and posture. Children can sometimes reveal when they are withholding something by looking down or playing with their hands and feet.

If your child is under the age of 1 or unable to speak, you will have to apply more critical thinking to the situation. Does the story match the injury? Are the bruises in an unusual location that you would not expect for their age group and ability? For example, infants below the age of 4 months are not capable of rolling, climbing furniture, or sitting up without support, thus falling off of changing tables from rolling over is unlikely. Infants between 4 and 7 months may grasp objects, put things in their mouths, roll over (closer to 7 months), sit up without support (closer to 7 months), and possibly even crawl (closer 7 months).

Infants between 7 and 12 months can sit without support and crawl, but are unable to climb on top of furniture. However, they will begin to pull themselves up on furniture or chairs (closer to 10 months) in order to further explore. With further development, the transitions into walking a few steps either with or without support from furniture increases the chance of minor injuries from falls and collisions with furniture. Bruises on the knees, elbows, forehead, hands, and feet can begin to occur with falls around this age. After 12 months, children are more likely to walk without support, opening up more possibilities for accidental injury.

Next, look for any behavioral changes in your child:

Bruising and trauma could be from abuse. Take particular notice of:

Any of the above should immediately be reported to the police: