Necrotizing Enterocolitis (“NEC”) is a deadly intestinal disease characterized by inflammation and injury of the gut wall barrier that may advance to necrosis and perforation of the gut. Advanced cases of NEC may lead to surgery and death.

Significantly higher rates of NEC have been found in premature or preterm babies with low birth weights who are fed cow’s milk-based formula or fortifier products.

What is Necrotizing Enterocolitis (“NEC”)?

Necrotizing Enterocolitis (“NEC”) is a very aggressive type of bacterial infection that can occur in the gastrointestinal tract of newborn babies. NEC can very often be fatal for the baby and even when it is not life-threatening it generally requires emergency surgery to treat.

NEC occurs when aggressive bacteria invade the walls of a baby’s intestines. This triggers an inflammatory response causing acute pain and discomfort for the baby. Eventually, the infection causes the tissue in the intestinal wall to decay and die, leading to a hole or perforation in the intestine.

When NEC leads to a perforation of the intestinal wall it can become very dangerous. The hole in the intestine allows dangerous bacteria to leak out of the gastrointestinal system into the abdominal cavity and result in a systemic infection.

How Common is NEC?

NEC primarily occurs in infants who are born prematurely. About 10% of premature babies who weigh under 1500 grams will suffer from NEC. Although NEC is most common in premature infants, it can sometimes occur in full-term or near-term babies. It is also a condition that generally occurs only in babies who are formula-fed.

What is the Mortality Rate of NEC?

NEC is a very serious and potentially deadly medical condition that is one of the leading causes of neonatal fatalities. The mortality rate of NEC depends on the severity of the infection and the age and weight of the baby. For premature infants weighing less than 1500 grams, the mortality rate for NEC is around 30-50%.

For larger, more developed preemies who weigh more than 2500 grams, the mortality rate for NEC is around 5-20%. For extremely premature infants with a birth weight under 1000 grams, NEC has a fatality rate of close to 100%.

Short-gut syndrome is the more serious long-term complication. This occurs when the baby has to undergo surgery to have part of their bowel surgically removed because of necrosis in the tissue. Short-gut syndrome can leave children with life-long difficulties in absorbing essential nutrients. 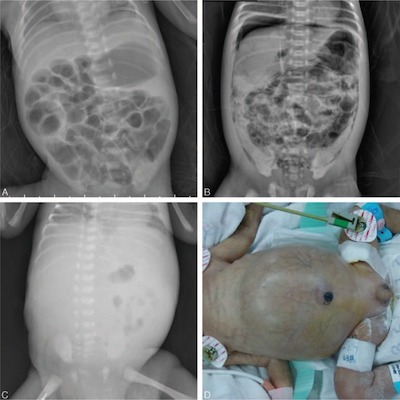 Diagnosis and Treatment of NEC

Once NEC is diagnosed, the appropriate course of treatment will depend on what stage the condition is in. For stage I and II, treatment consists of nonoperative management. This involves stopping enteral feedings, performing nasogastric decompression, and initiating broad-spectrum antibiotics.

For cases of NEC that are assessed at stage III or higher, emergency surgical intervention is generally required. Surgery is necessary to remove any part of the bowel or intestinal tract that is no longer viable due to tissue necrosis. The guiding principle of surgery for NEC is to resect only perforated and unquestionably necrotic intestine.

Link Between Infant Formula and NEC

Recent scientific research and clinical studies have shown that infant formulas made from cow’s milk (e.g., Similac and Enfamil) significantly increase the risk of NEC occurring in premature infants.

A study published in 2009 evaluated the health benefits of an exclusively human milk-based diet as compared to a diet with both human milk and cow’s milk-based products in extremely premature infants. The results show that preterm babies fed an exclusively human milk-based diet were 90% less likely to develop surgical NEC as compared to a diet that included some cow’s milk-based products. S. Sullivan, et al, An Exclusively Human Milk-Based Diet Is Associated with a Lower Rate of Necrotizing Enterocolitis than a Diet of Human Milk and Bovine Milk-Based Products, JOURNAL OF PEDIATRICS, 156: 562-7 (2010) (emphasis added). In 2011, the U.S. Surgeon General published a report stating that premature infants who are not breastfed are 138% more likely to develop NEC.

A 2017 publication by the American Society for Nutrition compared the results from two randomized clinical trials on preterm infants with severely low weight (between 500 and 1250 grams at birth) and compared the effect of cow’s milk-based preterm infant formula to human milk as to the rate of NEC. Both trials found that an exclusive human milk diet resulted in a much lower incidence of NEC.

While the study noted that cow’s milk-based preterm formulas provided consistent calories and were less expensive than human milk-based products, the cow’s milk-based products significantly increase the risk of NEC and death. The study also noted the “exponential” health care costs associated with NEC and noted data from the U.S. from 2011-2012 that showed that the cost of NEC is $180,000 to $198,000 per infant and nearly doubles to $313,000 per infant for surgically treated NEC.