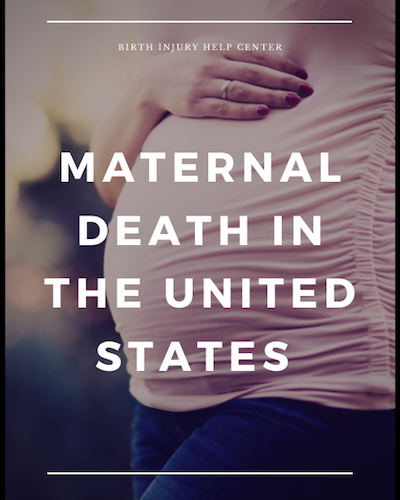 Maternal death is one of the most tragic topics to talk about when it comes to pregnancy conditions. No one likes to imagine the idea that an expecting mother who was looking forward to having a child suddenly passes away, leaving friends and family devastated. Maternal death is often the small thought that lingers in the back of a mother’s mind, usually brushing off the chance that it could happen to them.

But new statistics are showing that maternal death in the United States is on the rise, and it’s crucial that expecting parents are equipped with the necessary knowledge needed to recognize potential warning signs. Maternal death can be preventable if the mother takes the right steps to maintain her health and wellbeing. If we work together to spread awareness about this pregnancy complication, we can help save lives.

What is Maternal Death? How is it Different From Pregnancy-Related Death?

Maternal death and pregnancy-related death are terms that are often used interchangeably, but they don’t mean exactly the same thing. Here’s the difference:

Maternal death, also known as maternal mortality, is when a woman dies during pregnancy or up to 42 days after the termination of pregnancy from health problems or conditions related to the pregnancy.

Pregnancy-related death is when a woman dies during pregnancy or up to 1 year after the termination of pregnancy from health problems or conditions related to the pregnancy.

As you can see, the definitions sound very similar but pregnancy-related deaths cover a longer period of time after birth. Both maternal death and pregnancy-related death occur due to complications related to the pregnancy itself, meaning that if a pregnant woman dies from an accident, such as a car crash, it isn’t categorized under either term. You might be wondering: why are there two different terms for conditions that are so alike? Well, it’s mainly for research purposes. Researchers who track these two conditions use several methods to determine how certain cases are classified and to understand the differences in how women die. 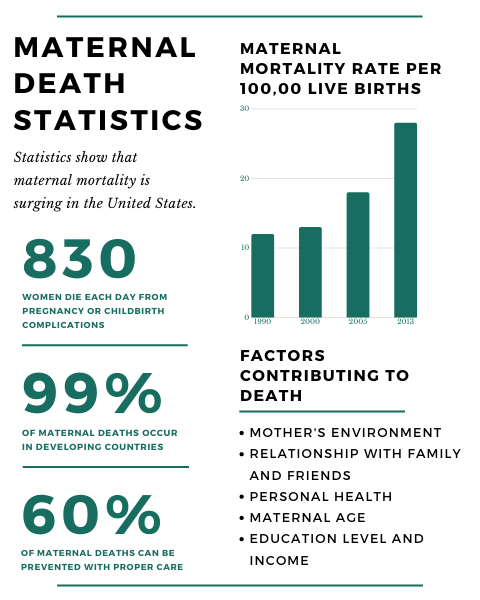 There are several different types of complications that can contribute to or cause maternal death and pregnancy-related death, and fortunately, doctors have been able to identify the most common ones. Nearly 75% of all maternal deaths are caused by:

Maternal death can also have different causes depending on the timing:

What are the Statistics on Maternal Mortality?

Globally, maternal mortality has significantly decreased by 38 percent between 2000 and 2017. Unfortunately, that isn’t the case for the United States itself. The United States maternal mortality rate increased from 7.2 deaths per 100,000 live births in 1987 to 16.7 per 100,000 live births in 2016. Other studies showed even higher rates, with results showing figures as high as 23.8 in 2014. This means that the United States is becoming one of the most unsafe countries for women giving birth, at least for developed countries.

These are quite some alarming statistics, and the data taken from the research indicates that the wide majority of these deaths are preventable. The CDC even released a report that said 60 percent of these deaths could have prevented if the mothers had better knowledge about the importance of prenatal and postnatal care, and had better access to quality healthcare.

Research also gives us insight into what is contributing to so much maternal mortality. It’s been found that unnecessary C-sections, limited access to prenatal/postnatal care, and racial/ethnic disparities all have a big impact on the surging death rate. African-American and Native American/Alaskan Native populations are three to four times more likely to die from pregnancy complications compared to White and Hispanic populations.

Who is at risk for pregnancy-related deaths?

As stated above, certain racial ethnicities are at a higher risk of maternal mortality, but there are other factors to be aware of as well. Some other factors that have been associated with maternal death include:

How can I Prevent Maternal Mortality?

The most obvious answer to this question is to make sure you get regular and quality healthcare throughout your entire pregnancy, including before and after you’re pregnant. Having frequent check-ups on your health can help doctors identify health problems before they turn into a bigger issue. It’s beneficial to talk to your doctor about all the warning signs and symptoms of serious complications so you can also know when to seek help if needed. If you’re worried about something in your pregnancy, never ignore your gut instinct. It’s always better to be over-prepared and cautious about your health.

Before You get Pregnant During Pregnancy After Pregnancy

Call your doctor immediately if you show signs of these conditions:

Maternal death is unfortunately turning out to be a big problem in the United States. We don’t have all the solutions, but it’s clear that something needs to be done about this tragic reality. If you’re planning to get pregnant, take your health seriously. Just because you feel healthy does not mean you do not need to go to regular check-ups. Every expecting mother should be extra cautious about how they take care of themselves, and if you’re struggling to do it yourself, reach out to friends and family! You never have to be alone in this process. Like we said above, maternal death IS preventable in most cases. Make sure you take the steps needed to keep you and your baby safe.

Eidson, K. (2019). America’s Maternal Mortality Crisis: Policy Proposal. The Trinity Papers (2011-present). (This study addressed the U.S.’ maternal death rate. It looked at the example of California, the only state to reduce its maternal death rate. The study reported that the state developed “toolkits” that addressed many maternal complications, including hemorrhaging. Researchers concluded that California’s model could be applied to address maternal deaths. Their other suggested solutions were the reinforcement of the ACA’s maternal care provisions and the adoption of uniform Maternal Mortality Review Committees.)

Mann, S., et al. (2019). What We Can Do about Maternal Mortality: And How to Do It Quickly. Obstetric Anesthesia Digest, 39(1), 17-17. (This study looked at four potential solutions that healthcare providers can implement to reverse the increasing maternal fatality rate.)

Joseph, K. S., et al. (2017). Factors underlying the temporal increase in maternal mortality in the United States. Obstetrics and Gynecology. 129(1), 91. (This study identified the underlying factors in the U.S.’ maternal mortality ratio increase. Researchers concluded that surveillance improvements and prior underreporting resulted in an increased maternal death rate. This meant that the death rate was higher than previously thought.)

Petersen, E.E., et al. (2019). Racial/ethnic disparities in pregnancy-related deaths—United States, 2007–2016. Morbidity and Mortality Weekly Report 68(35), 762. (The researchers found that maternal death rates were higher among black and Native American/Alaska Native women than white, Latina, and Asian/Pacific Islander women. They found that these disparities were still present when accounting for states with low maternal deaths and highly educated populations. The researchers concluded that several strategies, including improving maternal healthcare access, should be implemented to address these disparities.)

Singh, G.K. (2021). Trends and social inequalities in maternal mortality in the United States, 1969-2018. International Journal of Maternal and Child Health and AIDS. 10(1), 29. (This looked at the relationship between social stratification and maternal death rates in the United States. The researchers found that Black women were 2.4 times at risk for maternal fatalities than White women. They also found that being unmarried, US-born, less educated, and a rural resident increased the maternal mortality risk. The researchers concluded that monitoring social disparities was key to reducing maternal deaths.)