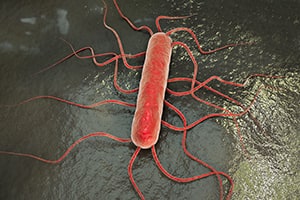 Monitoring your diet during pregnancy is important to avoid foodborne illnesses that can have an impact on your baby. Certain foods if prepared incorrectly can harbor bacteria and viruses that can be harmful to your body. Listeria is a type of bacteria that can be found in contaminated food and can cause an infection known as listeriosis. Listeriosis infections are relatively rare for an average person, but pregnant women have an increased risk of contracting it and developing complications.

Listeria is a type of bacteria. There are several different species of listeria, with the subspecies L. Monocytogenes being the pathogen that primarily infects humans. Listeria is found in water and soil, which is a common source of vegetable contamination. Animals can also be a carrier for the bacteria and it is often found in uncooked meats. Other substances, such as unpasteurized milk and processed foods are known to carry listeria as well. Some pre-cooked or ready-to-eat foods can pick up listeria during the packaging process after it was already cooked[1]. With all the different ways listeria can contaminate foods, pregnant women need to take extra precautions to monitor what they are eating.

How Common is Listeria in Pregnant Women?

Each year there are around 1,600 people that contract a listeria infection, according to the Centers for Disease Control (CDC). Out of this population, approximately 260 will die from a listeria infection. The percentage of pregnant women in the infected group is about 17%. That number may seem low, but the CDC warns that pregnant women are 10 times more likely to be infected with listeria than the average person. This is because a woman's immune system is often suppressed while pregnant, making it harder to fight off common exposure infections involving bacteria like listeria.

Listeria is a slow-growing bacteria so it may take up to 30 days after exposure for symptoms of listeriosis to first appear. Symptoms of listeriosis are similar to the flu, with fever, muscle aches, chills, and headaches, but may also include nausea and vomiting. If left untreated, the infection can spread to the nervous system, which causes stiff neck, disorientation, or seizures.

Pregnant women in their third trimester are most vulnerable to contracting the illness, but it's possible to get infected at any point during pregnancy. If you begin experiencing these symptoms, contact your doctor and inform them of any food you recently ate. A blood test can confirm a diagnosis of listeriosis. Testing can also be done on urine and spinal fluid.

Listeria can become a serious infection that can cause harm to both you and your baby. Pregnant women with listeriosis have an increased risk of having a miscarriage or premature delivery[4]. Premature delivery can cause several different complications with the baby, such as low birth weight, birth defects, and cognitive disabilities. This is why early testing for listeriosis is so critical.

The baby may also be born already infected with listeria, which can be fatal. 22% of cases of perinatal listeriosis result in stillbirth or neonatal death, which makes it crucial to get early treatment[2]. With treatment of the illness, fetal infection and other complications can be avoided.

How do I Avoid Contracting Listeria?

To avoid listeria, you should practice safe food handling and make sure the food you're eating has been properly cooked and processed. Thoroughly wash all fruits and vegetables before consuming them, and keep preparation areas clean and disinfected. Regularly clean out your fridge and keep the thermometer at 40 degrees or below to prevent the growth of bacteria.

Avoid soft cheeses as they are more likely to be unpasteurized. Cheeses like feta, brie, queso-fresco, queso blanco, and panela are generally not safe for pregnant women to eat[3]. Hard cheese and processed cheese are much better choices since they are almost always pasteurized. Cheddar, mozzarella, cream cheese, and cottage cheese are considered safe. If you're unsure about whether or not something is pasteurized, always read the attached label.

Take extra precaution when eating hot dogs or deli meats unless they have been properly reheated to at least 160 degrees. These foods are known to be contaminated with listeria when they are being packaged due to cross-contamination with uncooked juices[1]. Avoid eating deli-meat sandwiches at restaurants or fast food locations, as the deli meat is usually not reheated before being served.

Do not eat refrigerated meat spreads or fish. Even in cool environments, there is a small possibility that listeria could still grow on these foods.

If you are unsure about what temperature is needed to properly cook food and kill off any potential bacteria, use this list as a reference. Cooking beef rare is not recommended.