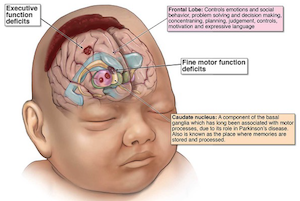 Perinatal hypoxic-ischemic encephalopathy (HIE) is one of the most serious and life-threatening types of infant brain damage that can occur during childbirth. HIE occurs when both oxygen and blood supply to a baby's brain is restricted or interrupted during childbirth (perinatal asphyxia) which causes brain cells to die after short periods.

What Is Hypoxic Ischemic Encephalopathy (HIE)?

Encephalopathy is a medical word that is used to reference various related conditions resulting from injury to the brain. Hypoxic ischemic encephalopathy (HIE) is a specific type of brain injury triggered by a combination of (1) hypoxia -- an interruption of oxygen circulation; and (2) ischemia - - blood flow restriction. Perinatal HIE occurs when blood and oxygen to the brain are simultaneously reduced or cutoff during childbirth or immediately after. HIE is a relatively rare event, occurring in about 3 out of every 1,000 births.

HIE is caused by acute loss of blood and oxygen flow to a baby’s brain during childbirth or during pregnancy. The deprivation of oxygen and blood causes cells in the baby’s developing brain to rapidly decay and then die. The oxygen deprivation that causes HIE is usually caused by obstetric complications during the labor and delivery process, but it can also result from prenatal complications or events. Complications that can cause HIE include:

HIE is an extremely serious type of brain injury. Even though it only occurs in less than .05% of all births, HIE is one of the leading causes of infant mortality in the U.S. every year.

Aside from being life-threatening, HIE also causes permanent brain damage. Somewhere between 15-20% newborns diagnosed with HIE will die in the first week. From the remainder that survives, 25% will suffer permanent brain damage to various degrees of severity. Brain injuries from HIE often result in physical disabilities and cognitive impairment.

A smaller percentage of babies with HIE have great outcomes. These children fully recover and experience only mild, if any, symptoms of neurologic injury. There is no data on life expectancy for the 80-85% of children with HIE how survive the first week of life. But clearly in severe cases, there is an impact on predicted life expectancy.

HIE symptoms immediately after birth will vary significantly based primarily on the severity of the underlying brain damage:

The primary treatment for HIE that has gained steam in recent years is body and head cooling. This treatment is commonly referred to as therapeutic hypothermia. Therapeutic hypothermia aims to bring the baby’s body temperature below normal immediately after birth. This effectively slows down the cellular decay and damage process within the brain. By slowing down this process hypothermia therapy aims to minimize the long term impact of HIE Unfortunately, damage to the brain from newborn hypoxia is permanent and cannot simply be fixed with surgery or medications. So HIE is a permanent injury. Treatment options involve therapy and medication to help manage the effects of any brain damage. Babies with severe HIE injuries will often need life-long support and accommodations.

But there are also amazing HIE recovery stories where the child was through to have a permanent injury who has a fantastic outcome. Success stories after HIE are not uncommon. Ultimately, the scope of the child's injury, and this is no consolation to parents, is often not fully understood until the child is much older.

This study examined MRI’s ability to assess brain injury in neonatal hypoxic-ischemic encephalopathy patients. The researchers found that the technology was a reliable prognostic biomarker and provided complementary metabolic information for HIE.

Abate, B. B., et al. (2021). "Effects of therapeutic hypothermia on death among asphyxiated neonates with hypoxic-ischemic encephalopathy: a systematic review and meta-analysis of randomized control trials." PloS one, 16(2).

This study looked at whether heart rate variability could detect HIE-related brain damage. The researchers concluded that the recent research supported HRV as a non-invasive tool that could monitor hypoxic-ischemic encephalopathy.

This review looked at whether stem cell therapy could treat hypoxic-ischemic encephalopathy. The researchers examined over 50 studies on this topic. They found that over 80 percent of these studies reported cognitive and sensorimotor function improvements and decreased brain damage. The researchers concluded that stem cell therapy combined with therapeutic hypothermia could become an effective treatment option for HIE.

This study looked at whether babies suffering mild hypoxic-ischemic encephalopathy have worse neurodevelopmental outcomes than their unaffected peers. The researchers found that at two years old, babies with mild HIE had lower cognitive composite scores than their unaffected peers. They also found that these scores were not that different from moderate HIE survivors who underwent brain cooling.

This review looked at HIE’s pathophysiology and potential mechanisms that could be utilized to treat the condition. The researchers reported that the HIE pathophysiology involved mitochondrial energy production failure, oxidative stress, glutaminergic excitotoxicity, and apoptosis.