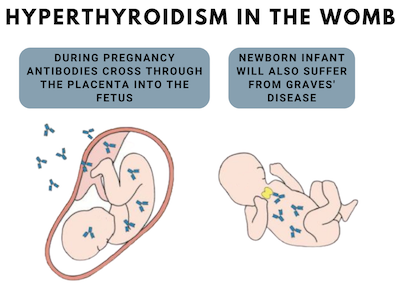 The thyroid is a butterfly-shaped gland located at the front of the neck that regulates metabolism. A normal pregnancy will result in a number of important physiological and hormonal changes that will alter a woman’s thyroid function, which means that any tests of thyroid function must be interpreted cautiously. Thyroid diseases result in several uncomfortable and potentially dangerous symptoms.

The thyroid is a small gland located in your neck. It produces hormones that regulate metabolism, body temperature, and heartbeat. In some scenarios, the thyroid produces either too much or too little of these necessary hormones, which results in thyroid disease. When the thyroid is overactive, producing too much thyroid hormone, this is called hyperthyroidism. This condition can “speed up” bodily function.

Graves’ disease is an autoimmune disease caused by a type of antibody called thyroid-stimulating immunoglobulin (TSI). Antibodies are proteins normally produced by the body to attack viruses and bacteria. In Graves’ disease, TSIs instead trigger the thyroid gland into overproducing hormones. TSIs mimic thyroid-stimulating hormone (TSH), a hormone released by the pituitary gland that tells the thyroid to release hormones.

It is unclear exactly what causes Graves’ disease. However, researchers know that it runs in families, and that pregnancy can trigger Graves’ disease in some women.

Common symptoms of Graves’ disease include:

Another cause of hyperthyroidism in pregnancy is abnormally high levels of hCG, a hormone produced by the placenta after implantation. This condition is called hyperemesis gravidarum, and it is characterized by severe nausea, vomiting, weight loss, and dehydration.

These symptoms are similar to those of other health conditions, so it is important to consult with your doctor for a proper diagnosis. Along with your health history and a physical exam, your health care provider can diagnose thyroid diseases by administering a blood test measuring the levels of thyroid-stimulating hormone (TSH), as well as T4 and T3 hormones.

Who is at Risk for Thyroid Disease?

You are at a higher risk than other women for developing a thyroid disease during pregnancy if you:

Dangers of Hyperthyroidism During Pregnancy

If left untreated, or not treated properly, there are several potentially dangerous complications that thyroid diseases during pregnancy can cause:

Preeclampsia: A serious condition that can start either at the beginning of the second trimester or after giving birth (known as postpartum preeclampsia). Abnormally high blood pressure can cause improper functioning of organs such as the kidney and liver, put massive stress on the heart, and cause pregnancy complications.

Pulmonary Hypertension: A type of high blood pressure that occurs in the arteries, lungs, and on the right side of the heart.

Placental Abruption: An extremely dangerous condition in which the placenta detaches from the uterine wall prior to birth.

Thyroid Storm: A condition in which symptoms of hyperthyroidism increase dramatically, putting the mother at high risk of heart failure. A rare but life-threatening condition.

How is Hyperthyroidism During Pregnancy Treated?

In cases of mild hyperthyroidism, in which hormone levels are only slightly elevated and there are minimal symptoms, the condition should be monitored closely. However, these cases do not require medical intervention as long as both the mother and baby are doing well.

In severe cases that do require treatment, there are medications and therapy that can be employed. Radioactive iodine is the most common treatment for hyperthyroidism. It is an effective way to gradually shrink the thyroid gland. However, it is not a safe option for pregnant women because it can cause thyroid problems in the baby, so other methods must be employed.

Hyperthyroidism is a manageable condition. However, pregnant women with hyperthyroidism need careful observation, as there is an increased risk of complications. Maintain an open dialogue with your health care provider so that together you can come up with a treatment plan that will ensure the best possible outcome for everyone.