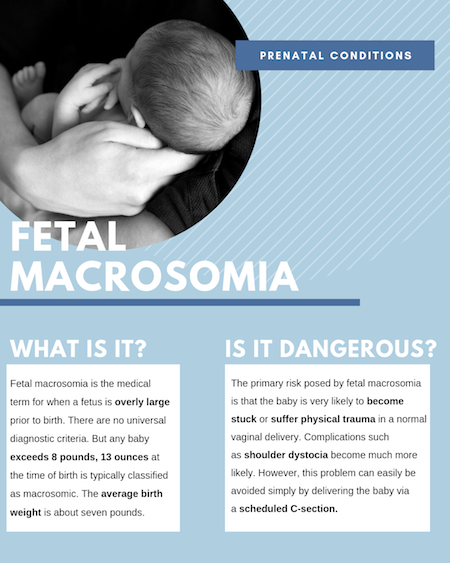 Fetal macrosomia is the medical term for when a fetus is overly large prior to birth. There are no universal diagnostic criteria. But any baby exceeds 8 pounds, 13 ounces at the time of birth is typically classified as macrosomic. The average birth weight is about seven pounds.

Fetal macrosomia is a relatively common condition affecting about 10% of all pregnancies. Fetal macrosomia is even more common for pregnant mothers with gestational diabetes. When the mother is diagnosed with gestational diabetes, she will have a 50% chance of having a macrosomic baby. There is no question that sometimes genetics can play a role as well. Mothers who delivered delivered a macrosomic child in the past are as much as ten times more likely than other mothers to deliver a macrosomic baby.

Fetal macrosomia is a potentially dangerous condition that automatically creates a high-risk pregnancy. The reason for this is fairly simple. When the baby is overly large it makes it much more difficult to pass through the small birth canal making a normal, vaginal delivery very problematic. This is sometimes called cephalopelvic disproportion. For this reason, it is very important that doctors accurately measure and estimate fetal weight during pregnancy. Advance diagnosis of fetal macrosomia is critical to avoiding dangers to both baby and mother, resulting in the need for resuscitation, birth injuries, and even death.

Measuring fetal weight and diagnosing fetal macrosomia may seem easy, but it is actually very complicated and notoriously difficult. This is because there is no practical method for weighing a fetus inside the womb. You obviously cannot take the fetus out and put it on a scale. Imaging equipment like sonograms and ultrasounds only provide visual images of the fetus. They are not able to accurately measure or estimate the weight of the fetus.

During the 3rd trimester, images from an ultrasound can be used to take measures of the fetus which can be used to help estimate fetal weight. The ultrasound uses a formula to calculate estimated fetal weight. Most of the fetuses used to create the formula are close to average. So the estimation of fetal weight through the use of a sonogram is not as accurate when children have an abnormally large head, abdomen, and long bone measures. Growth pattern analysis based on earlier ultrasound images are actually a more effective way of diagnosing macrosomia. Accurate diagnosis of fetal macrosomia is usually made based on 2 other indicators:

One known cause of fetal macrosomia is somewhat obvious: genetics. Physical traits like body size and obesity are passed on through genetic inheritance. So physically large or obese parents are more likely to have babies that are abnormally large.

Gender also plays a role in fetal macrosomia. Male babies are much more likely to be macrosomic than female babies. Again, the reason for this is sort of obvious: males babies tend to be bigger than female babies. Another key cause/risk factor for fetal macrosomia is diabetes. Mothers who have diabetes prior to getting pregnant or who develop gestational diabetes during pregnancy are 10 times more likely to have macrosomic babies.

The primary risk posed by fetal macrosomia is that the baby is very likely to become stuck or suffer physical trauma in a normal vaginal delivery. A mismatch in size between the mother's pelvis and the baby's head is known as cephalopelvic disproportion. When fetal macrosomia is timely diagnosed in advance, this problem can easily be avoided simply by delivering the baby via a scheduled C-section.

When fetal macrosomia is not diagnosed in advanced, it can result is very hazardous conditions during a vaginal delivery. Complications such as shoulder dystocia become much more likely and the risk of the baby becoming stuck in the birth canal increase dramatically. Anytime a baby becomes stuck or otherwise has a difficult passage through the birth canal in creates a very real risk of birth injuries. A good OB/GYN will counsel the patient about the option of a Caesarian section and the risks associated with the vaginal delivery of a macrosomic baby.

Should the mother be induced because of concern about suspected fetal macrosomia? American Board of Obstetrics and Gynecology (ACOG) Guidelines suggests that "Suspected fetal macrosomia is not an indication for induction of labor, because induction does not improve maternal or fetal outcomes." But a C-section is a different story. The same ACOG guideline states: "With an estimated fetal weight of greater than 4,500 g, a prolonged second stage of labor or arrest of descent in the second stage is an indication for cesarean delivery.