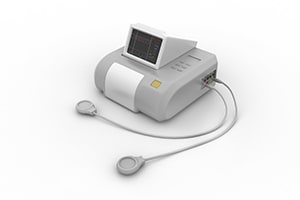 The term fetal monitoring generally refers to the process of listening to and interpreting the heartbeat patterns of a baby during labor and delivery. Doctors and nurses watch and interpret the fetal heart patterns to assess whether the baby is under too much stress and decide if they need to intervene in the delivery. This page will review the history and evolution of fetal monitoring and examine the modern methods of electronic fetal monitoring.

The earliest documented effort at fetal monitoring date back to around the 17th century when several European doctors began advocating the practice of placing an ear on a pregnant mother's belly to listen to the baby's heart rate.  Doctors have known for a long time that the baby's heart rate during pregnancy provided a good read on the overall health of the baby.  It was not until after the invention of the stethoscope in the early 1800s that the technique of intermittent monitoring of the fetal heartbeat during labor became a common practice.

This practice continued for another 100 years until an early fetal electrocardiogram device was developed in Germany in 1906. During these earlier years, however, fetal monitoring was primarily used only to check if the baby was still alive and not to evaluate fetal duress during labor. In 1958 a doctor from Yale University published a groundbreaking study that first explained how to identify fetal stress through continuous tracking of heart patterns. This led to an intense focus on the development of new and more advanced prenatal fetal monitoring devices.

By the early 1970s, the first generation of continuous electronic fetal monitoring devices were appearing in hospitals across the U.S. and Western Europe. The introduction of EFM devices marked a genuine breakthrough in the medical childbirth process. By 1980,  a study EFM devices were being used in 45% of hospital deliveries and just 10 years later EFM use was reported in 85% of deliveries. Today EFM devices are more advanced and highly accurate and are used in over 95% of all hospital deliveries. 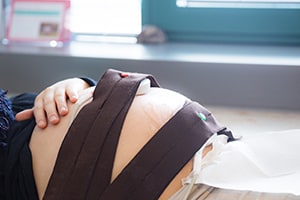 Electronic fetal monitoring (EFM) or cardiotocography, is the most advance and accurate method of fetal monitoring. EFM monitors both the fetal heart rate (FHR) and the mother's contractions. A special ultrasound device is utilized to track the baby's heartbeat and a pressure sensor measures uterine contractions. Both external devices are embedded into adjustable monitoring strips which are strapped around the mother's belly like a belt. The fetal heart strip is strapped around the center of the abdomen and the strip that measures contractions goes at the top of the abdomen. Both strips connect to a monitoring terminal that displays the FHR and maternal contractions on a computer screen or a printout.

The FHR pattern information together with the measurements of the mother's contractions is referred to as EFM tracings. The EFM tracings provide critical insight into the level of stress the baby is under during labor and birth. The FHR monitor identifies the normal baseline heart rate and then tracks how the rate rhythm accelerates and decelerates during each contraction. Interpreting the acceleration and deceleration FHR patterns in response to contractions tells doctors and nurses if the baby is under duress and may not be getting enough oxygen.

How to Read Fetal Heart Tracings

For EFM to be an effective tool at preventing potential harm to babies during delivery, the doctors and nurses in the delivery room must properly monitor and accurately interpret the EFM tracings. Reading EFM tracings can be somewhat complicated and subjective. In the early days of EFM doctors and nurses tended to read the meaning of EFM tracings very differently based on their background and educational training.

More recent efforts to standardize EFM interpretation has led to the development of uniform guidelines for EFM data. FHR patterns evident on EFM tracings are now classified as either category I, II or II. Category I tracings are considered normal or "reassuring" and indicate that everything is okay with the baby. Category II tracings are described as "non-reassuring" and an indication that the doctor may need to intervene to prevent harm to the baby. EFM tracings in Category III are considered "ominous" and require immediate emergency intervention. The charts below list some of the Category II and II FHR patterns:

Normal baseline FHR range is between 120-160 beats per minute. Baseline FHR refers to the fetal heart rate during the resting period between contractions.

Deceleration refers to how the FHR slows down after a contraction. During a uterine contraction, the FHR speeds up (acceleration) due to the compression of the placenta as the mother's uterus muscles push the baby through the birth canal.

When the contraction ends the baby's FHR normally slows down (decelerates) in a slow, even pattern and eventually returns to the normal baseline FHR. When FHR does not decelerate in a normal pattern after a contraction it is a key indication that the baby is under stress.