What is Erb's Palsy?

Erb's Palsy is a birth injury in which nerves at the base of the baby’s neck are damaged during delivery resulting in full or partial paralysis in the baby’s arm. Children with Erb’s Palsy (or Erb-Duchenne Palsy) will have some level of physical disability and paralysis in the affected arm. The most severe cases of Erb’s Palsy can involve complete paralysis from the shoulder down, but most cases involve only moderate immobility.

Erb’s Palsy is an injury during childbirth, not a disease. It results when a baby’s brachial plexus nerves are torn during a difficult vaginal delivery. Like other birth injuries, Erb’s Palsy can be prevented with proper obstetric care. OB/GYNs should recognize the risks factors for nerve damage and Erb’s Palsy and take preventive measures.

The brachial plexus is cluster of nerves in the shoulder area which connects the neck to the arm. Erb's Palsy is defined as arm paralysis caused by injury to a specific merger point of 2 nerve roots (know as “Erb’s point) in the brachial plexus. Erb’s Palsy can be distinguished from other types of brachial plexus injuries (such as Klumpke's Palsy) based on the location of the nerve injury. Erb’s Palsy specifically affects the upper two of the five brachial plexus nerves (C5&C6) and often does not prevent lower arm movements such as the wiggling of fingers.

Klumpke’s Palsy is similar but less common and it happens when the nerve damage occurs in a different junction point in the brachial plexus. Klumpke’s Palsy involves injury to the lower nerve junctions (the C8 and T1 nerve roots).

The brachial plexus is the most important set of nerves located within the arm, and their role is to give movement, flexibility, and feeling to the arm, hand, and fingers. These nerves consist of thousands of fibers which carry electrical signals back and forth between the brain and the muscles of the arm and hand. When injured, normal nerve impulses are impaired and the spinal cord is unable to send messages to the arm, hand, wrist, and/or fingers as they normally would.

Presentation and Characteristics of Erb’s Palsy

The singular characteristic of Erb’s Palsy is immobility, weakness, or paralysis in the arm. Paralysis is from the shoulder down and can be complete or only partial. Feeling and sensation is usually diminished in the arm. This lack of sensation, combined with the paralysis, usually leads to muscular atrophy in the biceps, deltoid, and other arm muscles.

In moderate to severe cases of Erb’s Palsy, the affected arm will often be noticeably abnormal in physical appearance. The arm will hang awkwardly and rotate inward. The atrophy of the biceps causes the wrist to be pulled or flexed instead of straight. This is sometimes described as “waiter’s tip arm” because it looks similar to a waiter when receiving a tip. The impacted arm will often have stunted growth and be noticeably smaller than the other arm. 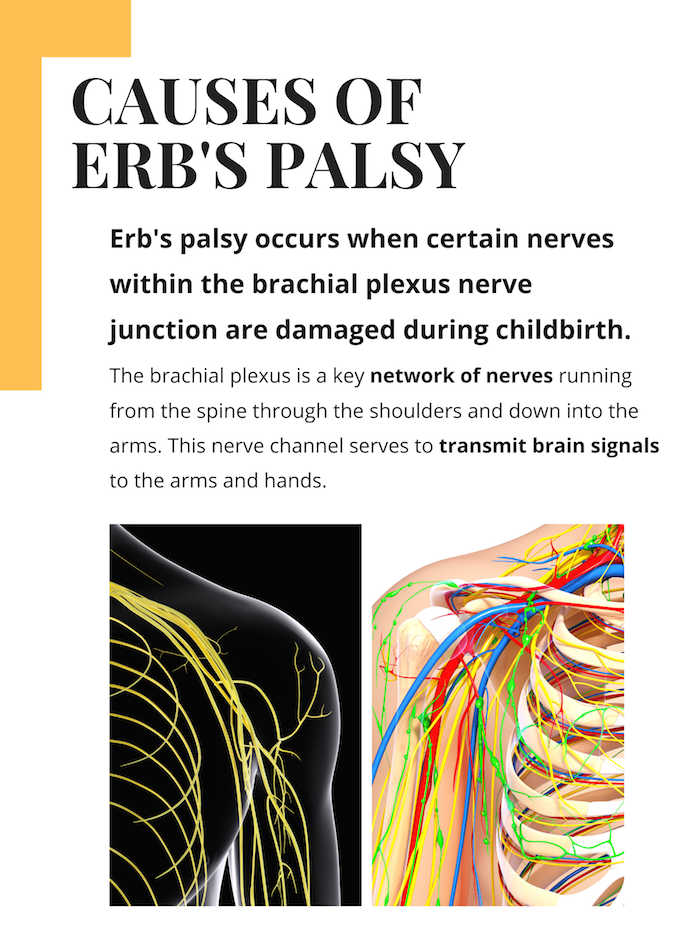 Depending on the severity of the injury, Erb's Palsy is typically classified into four categories, which are characterized as follows:

Below are simple, easy to understand answers to some of the most common questions and concerns about Erbs palsy and related conditions.

What is Erb’s palsy?

Erb's palsy is a birth injury in which damage to the brachial plexus nerves at the base of the baby’s neck occurs during vaginal delivery resulting in full or partial paralysis of the arm.

A child with Erb’s palsy will usually have some noticeable level of paralysis or disability in one of their arms. The affected arm may be smaller, non-mobile, and sometimes twisted or contorted.

How does Erb’s palsy happen?

Erb’s palsy happens when the nerves at the base of a baby’s neck are stretched out and torn during a difficult vaginal childbirth.

What nerves are damaged in Erb's palsy?

What is waiter’s tip hand?

Waiters tip hand is a name used to describe the common deformity resulting from Erb’s palsy where the arm hands limp with internal rotation at the elbow and wrist causing to appear as if its being held out for a tip.

Can Erb’s palsy be cured?