Human babies start out as eggs produced in a mother's ovaries. Once an egg is fertilized by the father's sperm, it attaches to the interior of the uterus where it will grow into a baby.

In an ectopic pregnancy, the fertilized egg attaches itself somewhere outside of the uterus. The most common location that the egg incorrectly attaches is the fallopian tube.

Outside of the uterus, a fertilized egg is unable to develop into a baby. The ectopic pregnancy needs to be diagnosed and removed in order to prevent the fallopian tubes from rupturing and producing potentially life-threatening internal bleeding.

The first step to becoming pregnant is the release of an egg, or ovum from the ovaries into the fallopian tubes. This is called ovulation. While in the fallopian tubes, the ovum must become fertilized by a sperm cell, at which point the egg becomes an embryo.

The embryo now needs to move into the uterus, which will hold and sustain the embryo as it develops into a fetus and until it's ready to be born. Once inside the uterus, the embryo burrows into the endometrium, the blood-rich inner layer of the uterus.

When an embryo implants anywhere other than the interior of the uterus, the pregnancy is ectopic. In most cases, the embryo implants somewhere in the fallopian tube. Rarely, it implants in the ovary, cervix, or even in the abdomen, removed from the reproductive organs altogether.

The term "ectopic pregnancy" is somewhat misleading. According to the American College of Obstetrics and Gynecology, pregnancy is defined as the implantation of an embryo in the uterine wall. Ectopic pregnancy cannot be treated like a regular pregnancy, and instead must be handled like a medical emergency.

What Causes Ectopic Pregnancy and Who is at Risk? 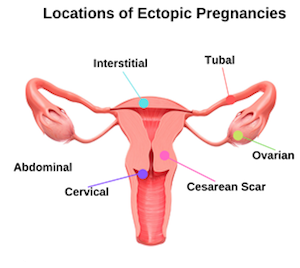 It is thought that ectopic pregnancies result from imperfections in the fallopian tube. Microscopic filaments called cilia that line the fallopian tube push the ovum and embryo through the tube. Damage to the cilia may cause the embryo to get stuck or move too slowly. Similarly, scar tissue in the tube may block the path of the embryo.

An embryo is able to grow for a few weeks outside of the uterus. It will not, however, receive a supply of oxygen or nutrients. Additionally, when the stress put on the affected organ by the growing embryo becomes too much, the organ will rupture.

This means that the embryo is unable to reach an age where it can survive on its own outside of the mother's body. There is no known surgical technique that would allow the embryo to be moved to the uterus.

Since the rupture of an organ can cause fatal blood loss, it is critical to find and treat ectopic pregnancies as soon as possible. When treated effectively, patients recover without any serious complications.

The biggest toll on patients of ectopic pregnancy is often emotional rather than physical. The loss of a pregnancy in addition to the threat of bodily harm can be shocking and upsetting.

Very rarely, a pregnancy is heterotopic, meaning that a normal, uterine pregnancy and an ectopic pregnancy exist simultaneously. This can happen in two ways.

First, in the same way that fraternal twins occur, two eggs can be released by the ovaries and fertilized at the same time. One of the eggs implants in the uterus and the other implants outside of the uterus.

Secondly, after an ectopic pregnancy has already formed, another egg can be fertilized and implant in the uterus at a later date. This is called superfetation.

The three signs of an ectopic pregnancy are abdominal pain, vaginal bleeding, and a missed period. At first, patients may experience symptoms typical of pregnancy, such as a missed period, nausea, breast tenderness, and fatigue. Patients may also have dizziness, vomiting, flulike symptoms, fainting, and fever.

An undiagnosed ectopic pregnancy will lead to the rupture of the organ that the embryo is attached to, causing potentially fatal internal bleeding. Intense pain and bleeding are signs that this has happened and that you need to seek medical attention immediately.

Pelvic examination, testing for the pregnancy hormone "human chorionic gonadotropin" (hCG), and ultrasound imaging are used to confirm the existence of an ectopic pregnancy and find its exact location.

The earlier ectopic pregnancy is diagnosed, the better the outlook for a patient's health, including their fertility. In recent decades, doctors have been able to diagnose ectopic pregnancy sooner, reducing the number of patients who suffer serious complications.

These statistics reinforce the importance of properly diagnosing ectopic pregnancy as soon as possible, before a rupture occurs. Research suggests that the timely diagnosis of ectopic pregnancy might be improved if doctors are more aware of the mistakes that can be made during diagnosis.

Doctors should consider the possibility of ectopic pregnancy for patients with tell-tale symptoms even when they're using birth control, don't have any of the risk factors, or haven't had a positive pregnancy test. Pregnant patients with abdominal pain should be immediately evaluated to assess the need for emergency surgery.

In the event that an ectopic pregnancy causes a rupture in the fallopian tube or another organ, surgery is urgently needed. Surgeons will need to repair the rupture, use medications to reduce bleeding, and remove blood that has bled out of the organ into the abdomen. Sometimes, removal of part or all of the affected organ is necessary.

Timely surgery is the most effective and common way of treating an ectopic pregnancy to prevent a rupture from occurring. Surgeons will perform a laparoscopy, inserting a small camera into the abdomen that allows them to remove the embryo and repair the affected organ.

A medicine called "methotrexate" is sometimes used instead of surgery to treat ectopic pregnancy. It stops cells in the embryo from growing. However, the medicine is not always effective the first time, and surgery may still be needed to remove or repair tissue.

Usually, this surgery does not affect the ability of a woman to have another child. However, when an incision is made on the fallopian tube, scar tissue forms. This increases the chance that subsequent pregnancies will also be ectopic.

The researchers found that increased telocyte counts in the fallopian tube might decrease tubal motility, affect the transferring of the blastocyst to the uterus, and contribute to ectopic pregnancies.

This study looked at a hospital that experienced increased rates of ruptured ectopic pregnancies during the COVID-19 pandemic. However, the researchers found that there were no ectopic pregnancy cases in mothers who underwent assisted reproduction.

This study found that combining mifepristone and methotrexate could treat interstitial pregnancies. However, the researchers reported that clinicians personalize the treatment based on obstetric history, clinical presentation, gestational age, and future pregnancy desire in cases involving high serum levels.

This study reviewed and compared published guideline recommendations for ectopic pregnancies. The researchers concluded that consistent international protocols were crucial to helping clinicians worldwide timely and accurately diagnose ectopic pregnancies to ensure earlier treatments that would lower the morbidity and mortality rates.

This study reported on delayed cesarean scar pregnancy diagnoses. The researchers also suggested that surgical treatments that include local methotrexate injections would help manage this condition.

This study provided an overview of evaluating and managing ectopic pregnancies. The researchers found that timely diagnoses were critical to reducing morbidity and mortality. They also found that transvaginal ultrasounds were the method of choice for pregnancy visualization. Ectopic pregnancy treatment options include surgery, methotrexate therapy, and expectant management. Surgery was necessary for patients who suffer from hemodynamic instability, medical contraindications, and medical treatment failures.

Osegi, N., et al. (2019). Abdominal pregnancy misdiagnosed as an intrauterine pregnancy: a cause of failed induction of labour for fetal death. International Journal of Reproduction, Contraception, Obstetrics and Gynecology, 8(8), 3383.

This case study pertained to an ectopic pregnancy that was misdiagnosed as an intrauterine one. It resulted in a stillbirth. The researchers concluded that healthcare providers should know the clinical signs that possibly indicate an ectopic pregnancy to reduce infant and maternal mortality.

This study found that a disproportionate number of women who experienced an ectopic pregnancy or miscarriage suffered PTSD symptoms. The researchers also found that some of these women experienced depression while others experienced moderate-to-severe anxiety. They reported that psychological morbidity persisted for at least three months after pregnancy loss.