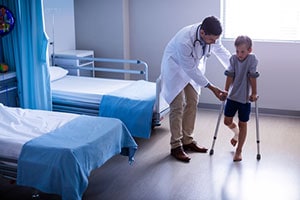 Dyskinetic cerebral palsy is a form of cerebral palsy primarily associated with brain damage to the cerebellum or basal ganglia, which can result in a range of developmental delays, physical difficulties, and involuntary muscle movements. The most prominent characteristics of dyskinetic CP are sudden contractions when attempting to move and posture abnormalities when resting.

What is Dyskinetic Cerebral Palsy?

Dyskinetic Cerebral palsy is sometimes described as consisting of two or three variations, which express some but not all of a range of symptoms while sharing the same causes and range of recommended treatments. Although these forms are sometimes distinguished from one another, the terms used to describe them are also frequently used interchangeably. If affected by Cerebral palsy, your child may be affected by some or all of the symptoms for either of the categories listed below - and if you are seeking further clarification on which version your child has, you should consult with a physician.

The two primary variations of dyskinetic cerebral palsy are known as Athetoid and Dystonic, and can be distinguished primarily as follows:

What are the Symptoms of Dyskinetic Cerebral Palsy?

The symptoms of Cerebral palsy tend to be different in each person, so if your child is affected by the condition, he or she will most likely exhibit some range of the symptoms listed below. Although the symptoms vary between the athetoid and dystonic versions of dyskinetic cerebral palsy, they can often overlap and thus are included below together. It is worth noting that mental ability is typically not affected, although cognitive impairment and/or epilepsy may develop in approximately 1 in 4 cases. Some of the first signs you should look out for are:

In addition, the most common symptoms of dyskinetic cerebral palsy include:

What is the Cause of Dyskinetic Cerebral Palsy?

How is Dyskinetic Cerebral Palsy Diagnosed?

Although dyskinetic cerebral palsy typically results from a traumatic brain injury near the time of birth, it usually cannot be diagnosed until later because its primary symptoms concern motor function. As these symptoms would not become apparent until your child ages and develops motor skills, this condition may not be fully diagnosable for a few months up to a maximum of around eighteen months in severe cases, or three or four years in milder cases.

Diagnoses are typically made primarily based on or as a result of observed symptoms, so it is important for parents and doctors alike to notice and follow-up should any signs develop. In addition to basing a diagnosis on the observation of symptoms, your doctor may also want to run a diagnostic test using a variety of imaging equipment. Some of this technology can pose its own risks to health, so it is important to weigh the benefits and drawbacks of any suggestion based on the specifics of your child's case. While monitoring hearing, vision, speech progress, and intellectual development may take more time, it's also likely to result in a more accurate diagnosis.

How is Dyskinetic Cerebral Palsy Treated?

There are a variety of treatments available for dyskinetic cerebral palsy available, and what is right for your child should be determined in full consultation with a physician or other medical expert. Generally, however, physical therapy is considered the most important aspect of treatment and is typically incorporated into the school day to ensure regular and consistent gains are made in areas such as controlling movements and improving posture. In addition, speech therapy can help your child improve their communication skills and overcome eating difficulties, while occupational therapy can provide benefits similar to physical therapy in improving both fine and rough motor skills. Yoga and massages may also provide benefits in terms of muscle relaxation, in a therapeutic, medically-advised context. In addition, various drug therapies or medicines are also available which may help alleviate some symptoms by preventing or controlling spasms. And finally, in certain cases, surgery may also be beneficial in helping to correct or prevent limb deformities.