Dealing With Down Syndrome 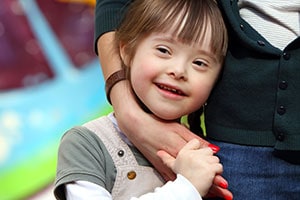 Down syndrome is a genetic disorder caused by abnormal cell division. The result is an extra copy of chromosome 21. This extra copy of genetic material is the cause of the physical characteristics of a person with Down syndrome and the reason why there may be some developmental difference in a patient who has this extra chromosome.

What is Down Syndrome and What is the Cause?

Patients with an entire extra copy of chromosome 21 have Down syndrome. The most common identification of people with Down syndrome is their face typically looks a bit different. Their eyes often have more slanted folds of skin at the inner corners. They typically have a smaller and flatter head, flatter ears, a large, thick tongue, and a shorter neck. People with Down syndrome also tend to be shorter. Other physical symptoms include poor muscle tone; hyper flexibility; short, broad hands with a single crease across the hands, broad feet with short toes and a small oral cavity or enlarged tongue.

Down syndrome is caused by a random type of error in the process of cell division which ends up leaving a duplicate copy of chromosome 21. This particular type of cell division error is called nondisjunction. Normally when a cell divides, the chromosome pairs split off and each new cell gets one each. When nondisjunction occurs, however, the cell divides but some chromosomes do not split off. One new cell ends up with duplicate chromosomes and the other has none at all. Nondisjunction occurs during the formation of an egg or sperm and appears to be a totally random occurrence. Research has not been able to link any environmental or other factors to an increased risk of nondisjunction.

Are There Different Types of Down Syndrome?

There are three major types of Down syndrome. Trisomy 21 is a chromosomal condition that occurs when there are three copies of a particular chromosome instead of the normal two copies. Trisomy 21 is caused by the presence that extra chromosome. This happens as a result of an anomaly in cell division during the development of either the egg or sperm during conception. It is the most severe form of Down but there are many Trisomy 21 children who go on to live healthy, happy, and productive lives. Trisomy 21 makes up an estimated 95% of those who have Down syndrome cases. Not that it matters but 88% of these cases stem from nondisjunction of the mother's egg cell.

Is There a way to Test for Down syndrome?

There is a test for Down syndrome. The most common test is amniotic fluid sampling by amniocentesis or obtaining tissue by chorionic villus sampling ("CVS"). But CVS is invasive and carries risks to the mother and what might be a very healthy fetus. CVS can cause a miscarriage. It may also cause fetal limb defects. The new MaterniT21 blood test is non-evasive and can catch 98% of fetuses that have Down syndrome. The test can cost a few hundred dollars even for patients who do have health insurance (the price has come down).

It is true that people with Down syndrome often have physical and intellectual development that is less advanced than their peers. But the good news is that many people with most people with Down syndrome are happy, productive people who have relatively medically uneventful lives. It is not fair to say Down patients suffer no more illness than their peers with normal chromosomes. But for many, the problems are navigable. Technology and research for Down syndrome have yielded great results. Even those with birth defects often have normal life spans. This is because advances in pediatric and cardiothoracic surgery have allowed surgical solutions to gastrointestinal and cardiac anomalies. For a minority of Down syndrome patients, there is a malady of potential complications

Is Down Syndrome Inherited From the Mother or Father?

Parents are eager to blame themselves when their child has Down syndrome But there is no evidence that there environmental factors or something the parents did before or after childbirth that cause this condition. Which parent gave the child the extra chromosome? It could be either the mother or the father (and it does not matter). But it is not a genetic thing that is inherited. It is just a random thing that happened during cell division early in the pregnancy.

Down Syndrome Bad Statistics and Facts

There are some of the less encouraging facts about Down syndrome:

Is the Mother's Age a Factor in the Risk of Down Syndrome?

Is There an Advocacy Group for People With Down Syndrome?