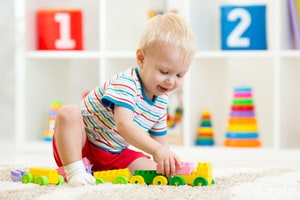 Children grow and develop at their own pace. You have to have a long time horizon when raising children or you will quickly go crazy.  Still, it is good to be on watch for red flags. In most serious cases, developmental delays can be symptoms of cerebral palsy and other birth injuries where prompt treatment can make a difference.

Developmental delays, on the other hand, can in many cases be outgrown and are often, but not always, caused by more short-lived issues such as something like a speech delay as a result of temporary hearing loss from an ear infection or impaired physical abilities from a long hospital stay.

Developmental delays can be signs of learning and attention issues that may come to light as the child ages, so if you think your infant or child may not be catching up as quickly as others at a similar age, it is very important to consider having a professional evaluation done to get a better idea of what specifically could be going on and how to meet your child's needs.

Developmental Milestones are physical skills and behaviors that are seen in infants and children as they progress in growth and development. For each age range, there are different milestones to look for. Listed below are milestones you should see at a given age range, however, these milestones may occur earlier or later in some children. If your child fails entirely to reach one of these milestones or is slow in doing so, it is important to consult with your physician to make sure nothing more serious is going on.

There are five primary areas where developmental delays can occur, including cognitive skills, social and emotional skills, speech and language skills, fine and gross motor skills, and activities of daily living. Delays can also occur between two or more of the areas, which is referred to as a "global developmental delay." The five areas are described in detail below.

What Factors Increase the Risk of Developmental Delays?

Developmental delays are not caused by one thing. One very common cause, however, is birth complications. Complications may include premature birth, low birth weight, and deprivation of oxygen at birth. In the most severe cases, birth complications may result in brain damage that has caused cerebral palsy that is the underlying reason for your child's developmental delays. Environmental issues such as lead poisoning, poor nutrition, and exposure to drugs and/or alcohol can also increase the risk.

Developmental delays are commonly seen in infants and children with cerebral palsy as a result of brain damage during or soon after birth due to birth complications. It is most noticed by the failure of the child in meeting some of the milestones, discussed above, at all or within a reasonable time. Physical delays often lead to cerebral palsy diagnoses when babies show delay or inability in being able to hold their head up when laying on their stomach, being able to lift their head up unsupported after 4 months, roll over, grasp toys, bring their hands to their mouth, or later after six months being unable to stand and bounce, sit without help, and crawl.

Lastly, language and communication delays are also seen in children with cerebral palsy and could result from cognitive or physical impairments. There can also be physical impairments that cause issues with vision and hearing. Symptoms can include a baby failing to coo and gurgle and turn at sound, failing to develop distinct consonant sounds, understand simples words like "no" or "mama", and respond to simple request and make gestures like waiving.