The History of Childbirth 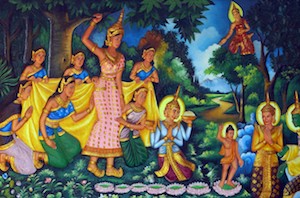 Childbirth is a uniquely painful and difficult experience for humans. Quirks in our evolution and development make giving birth more dangerous for us than it is for any other mammal, including our ape cousins.

Humans are descended from ape-like creatures that walked on four legs. When early humans evolved to walk upright on two legs, our pelvises got smaller. Later, we changed again—our brains grew larger and larger. It is this ratio of head to pelvis size that makes our births so difficult and unlike other animal births.

Another hypothesis is that childbirth became more difficult after humans began farming. Archaeologists first became suspicious when they found few infant skeletons in hunter-gatherer burials but found a great deal of them in farming communities. A carbohydrate-rich diet made farmers shorter and fatter than hunter-gathers, whose diets were more nutritious. This meant that women had even smaller pelvises and that babies became fatter in the womb, making birth more difficult and leading to more fatalities for mothers and babies.

Sculptural depictions of pregnant women are found in many prehistorical cultures. The significance of these sculptures and their use is unknown. However, the exaggeration of the female anatomy in such figurines as the “Venus of Willendorf” (~26,000 BCE, Austria) suggests that they are related to childbearing and female fertility.

Perhaps these figurines were thought to contain a spirit who, in addition to aiding in fertility, presided over other important facets of life, such as animals, land, home, or hunting. Some scholars speculate, alternatively, that they were worn by women as amulets or talismans to protect them during pregnancy and childbirth.

For much of history, though male philosophers and doctors frequently pontificated about pregnancy and childbirth, men were largely uninvolved in birth itself. In some cultures, men were forbidden to participate in or even watch childbirth. Instead of doctors and nurses, women were attended by relatives and midwives who supported them as they delivered and offered what remedies and strategies they could.

Knowledge of midwifery was passed on from one generation to the next by members of a community. Eventually, books were published on the subject. In some societies, aspiring midwives entered apprenticeships. Some midwives worked from time to time when needed in the community, while others traveled long distances from house to house and were employed regularly. If complications arose, they called for a local physician who assisted with his medical instruments. Midwives were sometimes responsible for taking a child to their baptism while the mother rested. They also played a legal role in documenting when babies were born and who the parents were.

Midwives knew about herbal remedies that could help pregnant women with a multitude of problems. They knew how to set up a room and position a woman for birth. If the baby was in the wrong position, midwives knew how to turn them. They would check the position of the baby by feeling the woman’s stomach and check how far the woman was dilated. Using oiled hands, they would help stretch the woman’s tissues before delivery. After a child was born, they would stick around for about a month to help the mother with skills like breastfeeding.

Apart from the advice of experienced women, childbirth, and medicine in general, was something of a wild west for a long time. Women were told, for example, not to think strange thoughts. If you thought about monkeys, say, your children would be born hairy.

Midwives, too, were sometimes accused of witchcraft if something went wrong with a pregnancy. Throughout history, midwives have been members of every social division, from the upper crust of society to the lower working class. Formal training and classes eventually became available to midwives.

Despite the efforts of midwives, childbirth was risky for both the mother and baby. In medieval times, as many as 1 in 3 women died during their childbearing years. It was so dangerous that young women would write their will when they discovered they were pregnant. Infection, postpartum hemorrhage, inexperienced midwives/doctors, and obstructed labor were common causes of death. 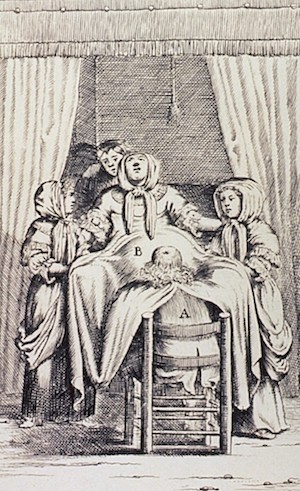 Stories of pregnancy and childbirth are sometimes featured in folklore and religion. Perhaps the most famous childbirth story is the Christian Nativity, in which the Virgin Mary gives birth to Jesus in a manger. In the Iroquois creation myth, a woman gives birth to two sons, one who creates all the good in the world and another who creates all the bad in the world. The Greek goddess Athene was said to have emerged from a crack in her father Zeus’ skull. And, in the Japanese fairytale, The Tale of the Bamboo Cutter, a man finds a baby girl inside a stalk of split bamboo.

Records of what it was like to give birth in different cultures across the world are slim due to the dominance of men as drivers of culture and the fact that women often gave birth behind closed doors. It is especially difficult to find descriptions of childbirth from middle and lower classes.

Accounts from Tudor England (1485-1603) illuminate what the process was like for noblewomen. For weeks before and after birth, the mother was shut off in a private room—this was called “lying in.” Beforehand, she went to church to receive the blessing of a priest. No men were allowed to see her during this period, and the room was shuttered up to imitate the darkness and calm of the womb. Trusted midwives assisted her, and prayers were recited to protect her from danger.

In the aristocratic household of Heian Japan (794-1185), the birthing room, which was supposed to be in the north of the house, was dressed in white. However, this was not a private birth. Male and female relatives and attendants would look over the curtains, as childbirth was somewhat of a spectacle. On a darker note, a Buddhist monk, a female spiritual medium called a miko, and other religious figures sat nearby the mother as she labored. Their prayers warded off hungry ghosts, lowly spirits that gathered around people who were near death.

Something that is clearly evidenced by artistic representations and continuing traditions is that women have not exclusively given birth while lying down. Carvings and illustrations all the way from Ancient Egypt up until recent centuries depict women giving birth in standing, squatting, kneeling, and sitting positions. Some form of quarantining the mother before or after childbirth is found in many cultures, from Latin America to China.

Forceps were invented in the eighteenth century. The tool is still used today in order to move babies through the birth canal when they become stuck. Since they could use forceps, male midwives and physicians claimed that they were superior to female midwives. Women were not allowed to do medical procedures, including using medical tools like forceps, at that point in time. While some wealthy women switched to using male midwives, the majority of mothers still went the traditional route.

Soon, however, other medical developments were devised that would make pregnancy easier and safer. By the mid- to late-nineteenth century, anesthetics were better understood. Doctors learned how to use chemicals to numb the pain of injured patients, which was especially helpful during surgery. Queen Victoria, for example, asked for chloroform as she gave birth.

Though anesthesia was readily adapted by medical professionals for other uses, pain relief during pregnancy was frowned upon at first. In the Bible, God’s punishment to Eve after she eats the forbidden fruit is that she will experience great pain when she bears children. Therefore, it was considered a woman’s duty to God to experience pain during birth in many Christian cultures.

During the same time period, it was discovered that pathogens are responsible for the spread of disease and infection. Doctors developed antiseptics and hygienic practices that drastically reduced deaths from surgical procedures. This made it possible for women to have c-sections without later inevitably dying of infection. C-sections had previously only been used in situations when the mother was not expected to live. Before the discovery of germ theory and antiseptics, doctors caused many more deaths than midwives did because they would not wash their hands in between different medical procedures, spreading infections from sickly people to mothers and babies.

These and other developments meant that by the 1900s the US and Canada had made a definitive move away from midwifery in favor of obstetrics. This was not so much the case in other countries, especially those with fewer economic resources. However, many developed countries, such as Great Britain, also retained the institution of midwifery even as they pursued obstetrics.

By the 1950s, 88% percent of births occurred in a hospital with a physician. Women were treated by nurses and doctors and laid horizontally during birth instead of standing or kneeling. The first US president born in a hospital was Jimmy Carter. He was born in 1924 in a Georgia facility where his mother was employed as an RN.

Recent decades have been defined by the fine-tuning of obstetrics and the invention of new reproductive technologies. Heart monitors alert doctors when a fetus is in distress. Ultrasounds and other imaging technologies reveal the gender of babies and identify potential problems with the pregnancy. Women take prenatal vitamins that keep them and their children healthier. These and other innovations have reduced maternal and fetal death rates around the world.

Recent decades have also been marked by the empowerment of women. Over the course of the 20th century, women in the US and around the world entered the medical profession in force. They themselves could become OB/GYNs, not just men. In many countries, midwives and nurses make up more than half of the health workforce.

In the 1970s, the natural birth movement emerged. Mothers began experimenting with home and waterbirths and with forgoing pain relief. These women wanted more control and a more personal experience. The movement, however, has been criticized for making women who want to use doctors and epidurals feel like their births are less “natural” or like they never experience “real” childbirth. The truth is that nobody should make a woman feel bad about whichever childbirth option she pursues.

Those searching for a happy medium between hospitals and home births have the option of using birthing centers, midwives, and doulas. While midwives can essentially replace an OB/GYN, doulas are not medical practitioners. Instead, they act as emotional support before and during delivery.

So far, we have not perfected the process of childbirth. In some countries, where healthcare is inaccessible, death rates for mothers and babies are still high. There are still complications that arise during any delivery that injure mothers and cause children to be born with disabilities. We have, however, come an incredibly long way over the course of just a few centuries of our more than 200,000 years here on Earth.