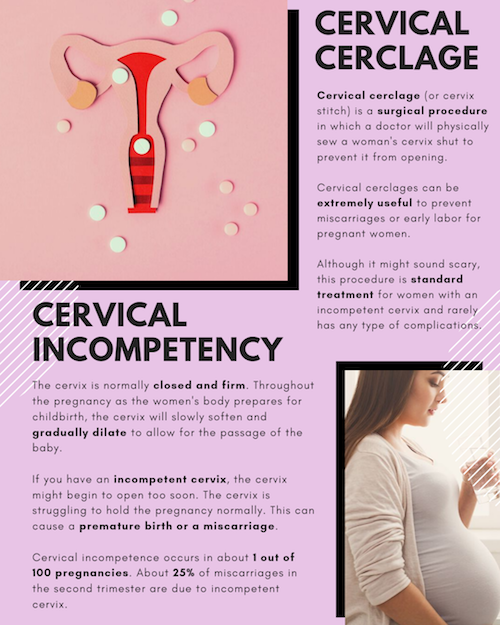 Some women are known to have what's called an incompetent cervix (also referred to as cervical insufficiency). This means that a woman's cervix is unusually weak and may not be able to properly hold a baby in place during pregnancy. Having an incompetent cervix can cause a woman to go into early labor, which can be risky or even fatal for the baby.

In a patient with cervical insufficiency, there is a premature opening of the cervix (internal os). The concern is that the cervix might further dilate and to cause uterine activity.

Cervical cerclage is surgical procedure in which stitches or surgical tape are used to close the cervix opening. It is a common treatment for cervical incompetency and helps to ensure that the baby stays in the uterus for the appropriate amount of time. The cervical cerclage will keep the cervix closed until around 37-38 weeks of pregnancy, when the doctor will remove the cerclage and allow labor to naturally begin.

What Is a Cervical Cerclage?

Cervical cerclage (or cervix stitch) is a surgical procedure in which a doctor will physically sew a woman's cervix shut to prevent it from opening. Cervical cerclages can be extremely useful to prevent miscarriages or early labor for pregnant women.

Although it might sound scary, this procedure is standard treatment for women with an incompetent cervix and rarely has any type of complications. Cervical cerclage is also a highly effective treatment method. According to a study recently published in the Professional Medical Journal, cervical cerclage procedures are successful 85% to 90% of the time[2].

There are several different types of cervical cerclage procedures:

What is Cervical Cerclage Used For?

Cervical cerclage is a treatment method for an incompetent cervix. Only a certain small percentage of women - less than 1% - will experience this complication during pregnancy. Cervical incompetency is usually something that is diagnosed early in pregnancy. However, there are some women who are already at a higher risk for cervix complications and a doctor may preemptively decide to perform a cervical cerclage to avoid potential complications[3]. Some common risk factor for a weak cervix include:

When is the Best Time for a Cervical Cerclage?

Cervical cerclage is usually performed by the third month of pregnancy, or between 12-14 weeks[3]. Early detection of the problem is key to preventing further issues later in the pregnancy. Some women may need a cervical cerclage later in pregnancy due to a sudden problem of the cervix shortening or opening, this is referred to as an emergent cerclage[5]. If a woman ends up needing an emergent cerclage, this is usually a sign that future pregnancies will face the same problem[1].

If the cervix opening is detected too late, cervical cerclage may not be an option because the opening is already too large. In these cases, women may be put on bed rest to reduce the possibility of early labor.

Benefits and Risks of Cervical Cerclage

It is always best to discuss with your doctor about the best route to take when overcoming pregnancy complications. Doctors will only suggest a cervical cerclage if they know the benefits outweigh the risks. A cervical cerclage that is properly performed can protect your baby from miscarriage or any complications presented from being born too early. It can have life-saving results and widely regarded as the best option for an incompetent cervix[1].

In rare cases, there could be some side effects that range from mild to severe. These risks include:

There are a few discussions and procedures you will have to go through before getting the cervical cerclage. Your doctor will go through your medical history with you and discuss any other pregnancy complications you have experienced in the past. Your doctor will also discuss different pain management options for the procedure, usually recommending some kind of localized or generalized anesthesia.

A physical examination of the cervix and a transvaginal ultrasound will be given prior to the procedure so the specialist can properly see your cervix and decide how to properly sew it. Being nervous or feeling anxiety about the procedure is natural, and it may help to bring up any questions or concerns you have at the initial appointment to ease any stress.

The actual procedure for a cervical cerclage is relatively simple. After giving the anesthesia (usually general, spinal, or epidural), the doctor will use a band of strong thread to sew around the cervix and tighten it until it's completely shut.

After the procedure, you may have to stay at the hospital for a few hours or possibly stay overnight. This is to make sure there are no immediate complications with contractions or early labor. It's normal to experience light bleeding and cramping for a few days, which is usually followed by a thick vaginal discharge that may last several weeks[4]. To prevent any kind of cervical infection, you may be given medication like antibiotics to take. You should plan to rest at home until the stitches are fully healed or until your doctor tells you it's okay to resume regular activity. To avoid complications, it's advised you abstain from sexual intercourse one week before the procedure and at least one week afterward[4].

What Happens During the Removal?

The cervical cerclage will remain until around the 37th week of pregnancy but can be removed earlier if your water breaks or labor contractions start[2]. The stitches will be removed in a doctor's office, which will only take a few minutes. The removal procedure is similar to getting a pap smear, and should not cause a lot of pain.