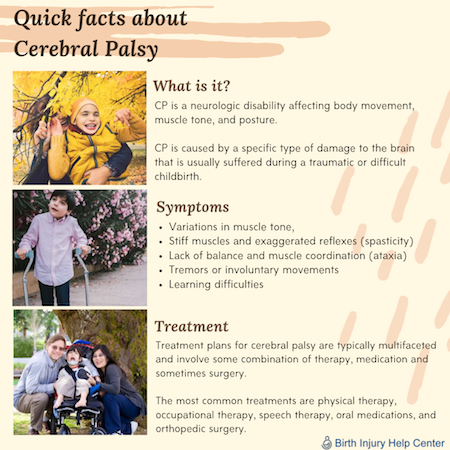 Cerebral palsy is a disability in which the brain is damaged and not able to properly control body and muscle movement. The particular type of brain damage that causes cerebral palsy typically occurs during childbirth when the supply of oxygen to the baby's brain is temporarily interrupted. Cerebral palsy is the most common type of serious birth injury and is the subject of many medical malpractice lawsuits.

What Is Cerebral Palsy?

Cerebral palsy is a neurologic disability affecting body movement, muscle tone, and posture. The word "cerebral" means relating to the brain or intellect and "palsy" means incapacity or paralysis. CP is caused by a specific type of damage to the brain that is usually suffered during a traumatic or difficult childbirth. When the flow of oxygen to the baby's brain is interrupted during childbirth, cells in the brain quickly begin to die. This is what eventually leads to cerebral palsy.

The severity of cerebral palsy and its physical symptoms can vary significantly for each individual. Mild or moderate cases of cerebral palsy might only result in a minor limp or awkward movements. Severe cerebral palsy cases can leave the child disabled and confined to a wheelchair.

Cerebral palsy is not a progressive disorder so it does not get worse with time. However, the damage to the brain that causes CP can never be reversed so there is no cure or effective treatment for the condition. In addition to the impact CP has on body movement, the condition can also result in seizures, cognitive impairment, and vision, hearing, and speech issues.

There are 4 recognized types of cerebral palsy. The cerebral palsy subtypes are generally defined by the specific areas of the body that are affected and the particular type of brain injury and resulting disability.

Spastic cerebral palsy is the most common form of the disorder accounting for over 80% of all CP cases. Spastic CP causes debilitating muscle stiffness in the affected area of the body. The muscle stiffness can make it very difficult or impossible to move certain parts of the individual's body.

When a normal person moves, their brain sends messages to their body which direct certain muscles to move in coordination with each other. In someone with spastic CP, these messages from the brain are impaired, causing muscles to suddenly stiffen and prevent movement.

Cases of spastic CP are categorized into 3 different subtypes based on the area of the body that is affected:

Dyskinetic cerebral palsy is characterized by muscles that suddenly go from overly stiff to overly loose when the individual attempts to move. This causes sudden involuntary movements that can be very rapid or slow. Dyskinetic CP usually affects both the arms and the legs. In some cases, the muscles in the mouth and face are impaired, causing issues with talking and swallowing food.

Ataxic cerebral palsy involves a significant lack of balance and coordination caused by interruption of the messages from the brain. Individuals with this type of CP may appear very clumsy, have trouble walking, or struggle with fine motor coordination.

This fourth category includes cases of cerebral palsy that involve a mix of 2 or more of the primary subtypes of CP. The most common type of mixed CP is spastic-dyskinetic.

Symptoms and Signs of Cerebral Palsy

Cerebral palsy is usually the result of injury to a baby's brain caused by loss of oxygen during childbirth. As a result, individuals with CP are usually born with the disorder.

The signs of cerebral palsy are often hard to detect at first. So, a formal diagnosis of the disorder may not be made until months or even years after birth. Most children are diagnosed with CP after 10-12 months, and almost all cases are diagnosed before 24 months. You want to make a diagnosis quickly to begin intervention. But the longer it takes to notice the signs of cerebral palsy, the less severe the CP is likely to be.

If there is a high suspicion of CP, doctors will often use the Gross Motor Function Classification System for CP (GMFCS) which is a relatively reliable method to predict the child's future motor function. If you are concerned, you should raise the issue whether you child should get tested with your pediatrician.

The signs and indications of cerebral palsy vary based on type and severity. Below are some of the more common signs of CP at various developmental stages:

The signs of cerebral palsy will be identified by a pediatrician as the baby develops and usually leads to a diagnosis around 10-12 months.

The underlying cause of all cases of cerebral palsy is the same. Cerebral palsy is caused by damage or developmental defects to the areas of the brain that control the movement of the body and coordination. Brain damage resulting in cerebral palsy can occur in the later stage of pregnancy, during labor and delivery, or shortly after birth.

The exact source of brain damage can vary greatly. According to the American Pregnancy Association, 20% of cerebral palsy cases are caused by labor and delivery events and 70% are attributable to events during pregnancy. Cerebral palsy birth injury lawyers would argue that the numbers are reversed.

It is hard to know the real answer because the medical literature often seems more interested in playing defense lawyer in a mythical cerebral palsy lawsuit in the journal article than taking about statistics in the unbiased, objective way we typically expect.

Suffice to say, it is also impossible to run from the fact that many cerebral palsy birth injury cases are the result of the negligence of a doctor or nurse. But victims also have to understand that sometimes cerebral palsy is not from a birth injury or medical mistake but from causes long before labor and delivery that are simply no one's fault.

Cerebral palsy is caused by damage to certain areas of the developing brain that control body movement. Sadly, once these parts of the brain are damaged, they will never fully heal and return to normal. Cerebral palsy is not a progressive disorder, so it will not get worse over time. But it is a permanent condition. Therefore, treatment options for cerebral palsy are focused more on the management of symptoms and increasing the individual's quality of life. Treatment plans for cerebral palsy are typically multifaceted and involve some combination of therapy, medication and sometimes surgery:

Physiotherapy, orthopedic appliances, massage, and taping also have roles to play in assisting the child's rehabilitation.

Caring for a child with cerebral palsy is expensive. Treatment and management of CP can require extensive therapy and mobility aids that are not always covered by normal health insurance. The good news is that there are numerous publicly sponsored programs and organizations to help families with the financial burden imposed by cerebral palsy.

Below are simple, easy-to-understand, answers to some of the most commonly asked questions about cerebral palsy.

Can You Get Cerebral Palsy Later in Life?

No. Cerebral palsy is not a disease that can develop at different stages of life. Cerebral palsy is usually the result of a hypoxic injury (loss of oxygen) to the brain during its early development. The brain damage that causes cerebral palsy occurs during pregnancy, birth, or in the weeks after birth. It cannot occur later in life when the brain is already fully developed.

What Are the Risk Factors for Cerebral Palsy?

There is data suggesting a genetic component to cerebral palsy in a minority of cases. But most complications or problems during pregnancy or labor and delivery will increase the risk of a baby suffering brain damage from oxygen loss and being diagnosed with cerebral palsy. Delivery complications that cause acute oxygen deprivation (e.g., uterine rupture or umbilical cord prolapse) carry the highest risk level.

When is Cerebral Palsy Diagnosed?

Very severe cases of cerebral palsy can usually be diagnosed immediately after birth, particularly when they are linked to a complication or adverse event during delivery. For less severe cases, however, cerebral palsy is usually not diagnosed until the child is 2 or 3 and sometimes even later.

Can a Child Grow Out of Cerebral Palsy?

No. Unfortunately, cerebral palsy is a permanent disorder and it is not something a child will grow out as the child ages. CP is caused by damage to cells in the brain during development. Once this brain damage occurs it cannot be corrected.