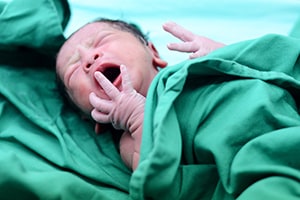 Cerebral palsy is a not really a single condition with uniform symptoms. There are actually 4 different recognized types of cerebral palsy: (1) spastic; (2) dyskinetic; (3) ataxic; and (2) mixed. Each specific type of cerebral palsy has a very unique set of outward physical symptoms.

Spastic is the most widespread form of cerebral palsy, accounting for about 8 out of 10 cases. The characteristic symptom of spastic CP is stiffness or sudden freezing of the muscles during movement (a condition known as hypertonia). When a normal person moves the brain is signaling certain muscles to engage while other muscles relax. In other words, the brain gives a green light signal to some muscles and a red light signal to others. In a person with spastic cerebral palsy, however, these signals from the brain are distorted. Instead of signaling certain muscles to relax while others engage, the brain signals both muscle groups to engage at the same time - both muscles get green lights. The result is similar to what would happen at an intersection if all lanes of traffic got green lights - a jam. The simultaneous activation of opposing muscle groups causes the muscles to stiffen, contract and freeze. There are different subtypes of spastic cerebral palsy based on what area of the body is disabled by the muscle spasticity. Spastic CP is usually easier to identify early on compared to other types of CP. So the diagnosis of spastic CP can often occur earlier in a child's development.

The least common form of cerebral palsy is ataxic CP. Children with this rare form of cerebral palsy suffer from a pronounced lack of balance, depth perception, and muscle coordination. Ataxic CP will often result in a very unsteady or wobbly walk with feet abnormally far apart. Any sort of fine motor movements such as writing will be particularly difficult. Some children with ataxic CP also experience "intention tremors" which cause their hands or arm to shake as they attempt to reach for something or perform a particular movement.

Signs of CP in Babies Under 6 Months:

Signs of CP in Babies Over 6 Months:

Signs of CP in Babies Over 10 Months: