Cerebral palsy is one of the most common movement disorders in the world. The highest quality, most reliable statistics on cerebral palsy come from 2 sources: 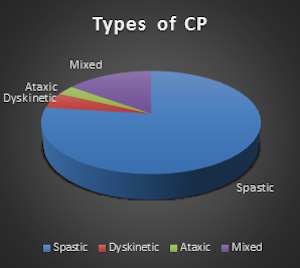 There are 4 different types of cerebral palsy, each with its own unique type of movement disorders: spastic, dyskinetic, ataxic, and mixed. Spastic CP is further broken down into subtypes based on the area of the body affected.

Approximately 58% of all children with cerebral palsy are able to walk independently (without the aid of mobility devices).

Around 11% of children with CP can walk independently with the aid of hand-held mobility devices (e.g., walkers, crutches).

The remaining 31% of children with CP are not able to walk independently at all and require the use of wheelchairs.

At 8 years old, about 60% of children with CP will be diagnosed with another, co-occurring developmental disability:

Cerebral palsy is caused by developmental abnormalities or damage to the developing brain causing impairment of the brain's ability to control body movement. The brain damage that results in CP typically occurs during pregnancy or childbirth. The CDC estimates that 90% of all cerebral palsy cases are the result of damage to the brain occurring during pregnancy or childbirth. Other statistics demonstrate clear risk factors.