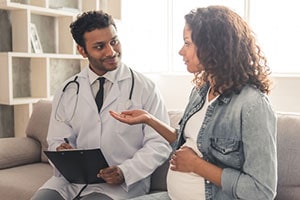 During a normal vaginal childbirth the baby's head is especially susceptible to physical trauma. Most birth injuries involving external head trauma are relatively minor. Cephalohematoma is a fairly common birth injury caused by physical trauma to the head during delivery which damages blood vessels causing a pool of blood to collect in the space between the baby's scalp and the skull.

Cephalohematoma injuries are caused by forceful external pressure to the baby's head during vaginal delivery. This pressure on the baby's head can come from one of 2 possible sources. The pressure can come from the baby's head being repeatedly pushed and compressed against the mother's pelvic bone by contractions during labor. This is more likely to occur when the baby is overly large (fetal macrosomia) or when labor is difficult and prolonged. The external force can also come from obstetric devices used during operative vaginal deliveries such as forceps or vacuum extractors.

The external shearing force of the mother's pelvis or delivery instruments against the baby's head damages delicate veins and blood vessels in the periosteum (a thin layer of vascular tissue that surrounds the skull). The damage to these blood vessels triggers internal bleeding. The blood is contained by ligaments attaching the periosteum to the skull and a blood pool gradually forms under the scalp. As the blood pool expands it pushes the periosteum up away from the skull causing a distinct lump to form on the baby's head. 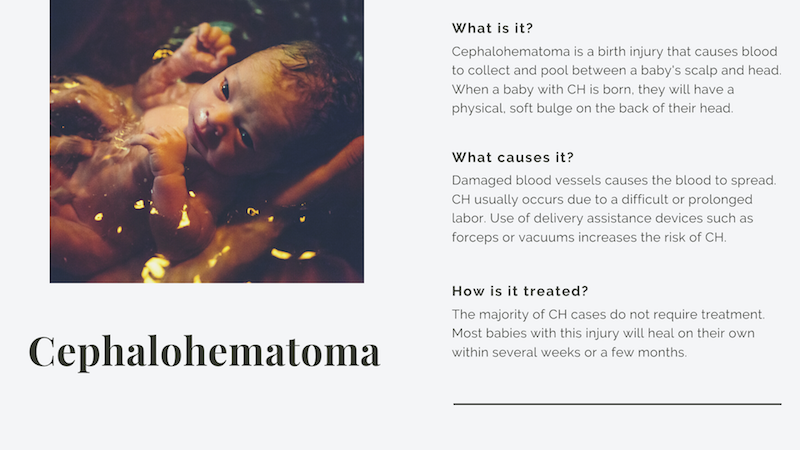 A cephalohematoma itself is basically harmless for 2 reasons. First, the blood pooling occurs outside the skull which means the brain is protected from any pressure or potential harm. Second, a cephalohematoma is self-containing in that the blood pool is retained by ligaments connecting the periosteum to the skull. The ligament connection boundaries combined with the pressure created by the accumulated pool of blood act like containment walls to stop further bleeding. However, a cephalohematoma can trigger certain complications that can be potentially harmful to the baby.

Cephalohematomas frequently cause linear fractures in the baby's skull. This is actually the most common complication associated with cephalohematomas, with incidence rates as high as 25%. Fortunately, these types of linear skull fractures are usually not very serious and heal on their own without any treatment.

A clinical case report of a large calcified cephalohematoma requiring surgical treatment can be found at Clin Res Trials 3: doi: 10.15761/CRT.1000195 (2017). The baby described in this report was delivered with vacuum extraction and a cephalohematoma was identified 24 hours after birth. The cephalohematoma did not dissolve on its own and soon began to harden. A CT scan confirmed calcification and surgery using a cap radial craniectomy was used.

Infection is probably the most dangerous possible complication from a cephalohematoma. This occurs when the pooled blood and fluid from the cephalohematoma become infected. Although this is fairly uncommon, when cephalohematoma infection occurs it can very quickly lead to a serious systemic infection such as cellulitis or sepsis. Infection at the cephalohematoma site has also been known to cause meningitis. These types of neonatal infection have a very high mortality rate so prompt diagnosis and treatment is critical.

Early clinical symptoms of possible cephalohematoma infection include poor feeding, sensitivity/irritability, and enlargement or tenderness of the cephalohematoma. Fever is also a symptom but only in about 60% of cases.

Babies born with cephalohematomas have an increased risk of developing anemia. This is because the pooling of blood from the cephalohematoma basically drains blood out of the baby's circulatory system. This loss of blood can rapidly result in anemic conditions in a newborn. Larger cephalohematomas involve more blood loss and therefore a higher risk of anemia. This cephalohematoma triggers anemia it can usually be treated effectively with blood transfusions or other treatment methods.

Hyperbilirubinemia is a fairly common complication associated with cephalohematomas. Hyperbilirubinemia is defined as an excess level of bilirubin in the blood. Bilirubin is chemical waste product that is leftover when the body recycles blood cells. Normally bilirubin is disposed of through liver filtration and urination but babies have a hard time catching up with bilirubin disposal when first born. When bilirubin levels in the baby's blood exceed a certain amount the condition is upgraded to infant jaundice.

Infant jaundice is a very common neonatal condition that can generally be managed very effectively without risk of harm to the baby. Babies with jaundice have a yellowish color in their skin and eyes which is caused by the surplus bilirubin in their blood. Most cases of infant jaundice go away on their own within a week or so without any significant treatment. More serious cases of jaundice may require treatment with light therapy. In rare cases, untreated infant jaundice can result in bilirubin levels so high that they cause a condition called kernicterus. Kernicterus causes brain damage and can be fatal.