Not all babies move into the normal head-first presentation before delivery. Instead, a certain percentage of babies do not reposition and end up with their butt and/or feet downwards towards the birth canal with the head up.

Normally in the last few weeks of a pregnancy the baby will gradually reposition itself in the head down presentation in preparation for birth. Head first is the normal presentation because it is the optimal position to safely and effectively facilitate vaginal delivery. When in the head first position the crown of the baby's skull functions like a spear head which pushes into and through the birth canal. 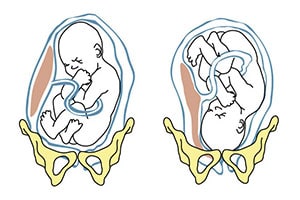 When and How is Breech Position Diagnosed?

Breech presentation is something that gets diagnosed towards the very end of a full term pregnancy. A formal diagnosis of breech presentation is not made until at least the 35th week of pregnancy because before week 35 it is perfectly normal for a baby to be positioned head-up or sideways. Repositioning is something that the baby is supposed to naturally do on their own in the final few weeks before birth.

Diagnosis of breech presentation will start in a prenatal examination occurring at or sometime after the 35th week of gestation. The doctor will initially perform a manual abdominal exam to gently feel around and identify the apparent position of the baby's head, butt and feet. If the baby doesn't seem to be in the expected position an ultrasound will usually be done to confirm the diagnosis of breech presentation. If ultrasound imaging is not enough there are also special prenatal X-rays that can be done to give doctors a more accurate image of the baby's presentation.

Implications and Management of Breech Presentation

When a baby is in breech position attempting a vaginal delivery can be very dangerous and most OB/GYNs will automatically plan to deliver the baby via C-section. There are several reasons why vaginal delivery of a breech baby is so hazardous.

Another major reason why vaginal delivery from breech position is so hazardous is because there is a much higher risk of a delivery complication called umbilical cord prolapse. Umbilical cord prolapse is one of the most dangerous events that can occur during childbirth. It occurs when the umbilical cord (the baby's lifeline to the mother) drops down into the birth canal in front of the baby (instead of behind like in a normal delivery). When the cord goes first and the baby comes through the birth canal after the umbilical cord gets squeezed and compressed against the walls of the birth canal by the baby's head and body. This can severely restrict or even cut off oxygen supply to the baby and cause major brain injuries or even death from perinatal asphyxia.

Attempting a vaginal delivery when the baby is in breech position can greatly increase the risk of a birth injury. Although there is currently a major push towards doing less C-sections, breech presentation is a situation where a planned C-section is simply the most sensible option. This is particularly true for premature babies that are more fragile.

This article looked at the association between a hospital’s C-section and external cephalic version rates. The researchers found that the ECV success rates correlated with C-section rates for persistent breech presentations.

Claire, G., et al. (2022). Neonatal morbidity and mortality for preterm in breech presentation regarding the onset mode of labor. Archives of Gynecology and Obstetrics, 1-10.

Coskun, B., et al. (2020). Comparison of Emergency and Elective Cesarean Sections in the Breech Presentation: A Case-Control Study.

This study looked at whether planned vaginal deliveries were safe for term breech presentations involving asymmetric pelvises. The researchers found higher vaginal delivery rates in the asymmetric pelvis group compared to the symmetric group. They also found no statistical differences in neonatal and maternal complications. The researchers concluded that breech presentation births were “not an indication for” an elective C-section.

This study compared and contrasted complications in spontaneous, induced, or C-section deliveries that involved breech presentation. The researchers found that induced vaginal deliveries had the highest complication rate, while C-sections had the lowest. They concluded that healthcare providers should consider specific delivery types’ risks and benefits when handling breech presentation pregnancies.