A blighted ovum is a miscarriage that occurs very early in pregnancy. The fertilized egg is unable to develop into an embryo after it has attached to the uterine wall. This type of miscarriage usually occurs within the very early stages of pregnancy (weeks 2-6), often before a woman even knows she's pregnant.

Still, losing your baby, even at an early stage of pregnancy, can be devastating for the parents, far more so than people appreciate who have not been through it.

Thankfully, as we discuss below, having an early miscarriage like this does not have any impact on having a healthy pregnancy in the future. This article addresses the causes of blighted ovum, treatment for it, and the long-term outlook for fertility after a miscarriage from an anembryonic pregnancy. 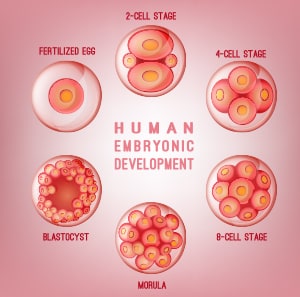 What Is a Blighted Ovum Miscarriage?

A blighted ovum occurs very early in the process of embryonic development. When sperm reaches an egg, the egg becomes fertilized and begins the rapid production of new cells within only a few hours. With a normal pregnancy, the fertilized egg will grow from a clump of cells into an embryo by the 10th day of development.

The embryo will then implant itself into the wall of the uterus. This triggers the release of high levels of pregnancy hormones in the body and causes the placenta to start developing to support the fetus. The fetus will continue to grow over the next few weeks, and around the 6th week of pregnancy, it will finally be visible on an ultrasound.

When blighted ovum occurs, this initial process is not completed. Sometimes the fertilized egg is not able to develop into an embryo but still implants itself into the uterus. In other cases, the transition from fertilized egg to embryo was successful but the embryo stops developing a few days after attaching.

For a doctor to diagnose a blighted ovum, an ultrasound will be performed and the doctor will identify an empty gestational sac with no signs of an embryo. This empty sac can usually be confirmed by the 8th week of pregnancy when the embryo would normally be visible. How long you carry a blighted ovum depends on what stage the blighted ovum miscarries.

There are several causes of a blighted ovum. The common thread is any anembryonic pregnancy is a genetic error or a genetic mistake.

From research conducted on multiple women who experienced a blighted ovum, there is a consensus that the wide majority of blighted ovum miscarriages are due to abnormal chromosomes[2]. The fertilized egg or embryo might be missing chromosomes or developed too many. This disrupts the normal process of development. In rare cases, genetic mutations can also be a cause for a blighted ovum, specifically for embryos that stopped developing after attaching to the uterus.

A blighted ovum is similar to other miscarriages in the sense that there was some developmental abnormality that ultimately caused the pregnancy to fail. It can create feelings of loss and despair, but it's important to understand that there is no way to prevent it from happening and women should not blame themselves.  For early miscarriages, there is often no way to know that something has gone wrong until your doctor identifies it. If you are a woman reading this, you have already heard this but you should hear it again: it is not your fault.

How Common is Blighted Ovum Miscarriage?

Accurate occurrence rates for blighted ovum miscarriages are understandably difficult because many women choose not to share their miscarriage stories.  However, miscarriages are actually very common, with around 10-20% of pregnancies ending in miscarriage[4]. In that statistic, early miscarriages are most prevalent with 80% of them occurring within the first 12 weeks. Additionally, many women have one or multiple miscarriages before they have a normal pregnancy.

The statistics for how common blighted ovum is can be hard to measure due to difficulties diagnosing the condition. Since it occurs so early, women may not even know they were pregnant and do not notice the miscarriage happening. From what is known, experts believe blighted ovum accounts for a third of miscarriages that occur before 8 weeks gestation[3].

Even though the embryo is not developing properly or has stopped altogether, a woman may experience early pregnancy symptoms since the body has recognized something attached to the uterus.

Until the embryo has been expelled from the body, hormones are still being produced and pregnancy tests can have positive results. A woman may have morning sickness, bloating, sore breasts, and other common symptoms that show up during the first weeks of pregnancy. However, some signs may indicate a woman has a blighted ovum or is experiencing a miscarriage:

A blighted ovum is confirmed when a sonogram shows no fetal heart tone.

After you have been diagnosed with a blighted ovum, there are a few different treatments available depending on how your body reacts to the attached egg or embryo.

For some women, there may be no treatment at all, as the body recognizes that there is no development and naturally passes the embryo by expelling the contents of the uterus. In these cases, the miscarriage will be similar to a heavy period, which can feel completely normal for someone unaware they had a blighted ovum.

If the blighted ovum is diagnosed but the body continues to act pregnant and releases hormones, your doctor may wait a few days to see if the body adjusts and eventually passes the embryo. If the body continues to keep the embryo attached despite no development, medication or surgery can be used to clear the contents of the uterus. Medication like Cytotec can induce a miscarriage which causes temporary heavy bleeding. A brief surgical procedure can be also be given by dilating the cervix and manually emptying the uterus.

Can A Blighted Ovum Give a False Positive Pregnancy Test?
A blighted ovum may occur before a woman is aware she is pregnant.  What often happens in these cases is the placenta will continue to develop after the miscarriage.  This is called an anembryonic pregnancy in which the body does not adapt to the miscarriage and continues to prepare for the baby. This will often lead to a false positive pregnancy test.
Can I Get Pregnant Again After a Blighted Ovum?

Miscarriages can be scary and make you feel like something is wrong with your fertility, but in most cases, this is not reality. Miscarriages are a natural part of pregnancies and often have no bearing on how fertile you are. Having one anembryonic pregnancy is usually no cause for concern. Normal pregnancies after a blighted ovum are normal. Statistics show you will likely have a normal and healthy pregnancy in the future, even immediately after a blighted ovum.

In a study involving women with early miscarriages, around 80% were able to have a successful pregnancy within the next five years[1]. The reason for these success stories is that treatments used for blighted ovum also have no negative effects on future pregnancies, even for surgical procedures.

If you have experienced multiple blighted ova or are struggling with miscarriages, there may be a different underlying problem, such as a hormone imbalance or genetic mutation. Your doctor can run tests to identify possible causes for complications in development.

How Long Can You Carry a Blighted Ovum?

When deciding how long to carry a blighted ovum, you are trying to balance the ease and low risk of a natural miscarriage (Dilation and Curettage or D&C surgery, for example, has some risks) versus the risk of infection if you do not have a natural miscarriage.  Some suggest you can wait between 9 to 11 weeks with an anembryonic pregnancy.

But you want to discuss with your doctor who will be able to best gauge the optimal path for you.

How Long Until I Can Try to Get Pregnant After a Blighted Ovum?

Doctors often suggest women wait three months before attempting to conceive after a blighted ovum while others say less.  You should talk to your doctor.

Do the COVID-19 Vaccines Cause a Blighted Ovum?

Three studies have been published that showed women are not at higher risk for a miscarriage after taking a COVID-19 vaccine.

This article provided an overview of a blighted ovum. It detailed its risk factors, clinical presentation, treatment and management options, differential diagnosis, and prognosis. The researchers also reported on patient education and the enhancement of healthcare team outcomes.

This case study looked at a late 20-something woman who suffered a blighted ovum. The researchers recommended healthcare providers should know how to properly manage and treat a blighted ovum.

This case study looked at a 25-year-old woman who suffered both a blighted ovum and an ectopic pregnancy. She underwent surgery. Her pregnancy was ultimately uneventful. The researchers concluded that blighted ova and ectopic pregnancies could occur at the same time. They recommended timely diagnoses and prompt management that could yield a favorable prognosis.

This study looked at the live birth, miscarriage, and abortion rates among American women with and without disabilities. The researchers found that women with disabilities were less likely to have live births compared to women without. However, they reported that these differences were insignificant when controlling for covariates. They also found that women with complex limitations were more likely to suffer miscarriages. The researchers concluded that disability status did not have a significant impact on pregnancy outcomes.

This study summarized a miscarriage’s epidemiology and medical causes. It also discussed the genetic abnormalities that contribute to a miscarriage.