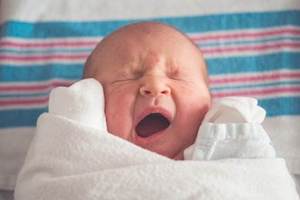 Bell's palsy is a condition that can impact newborn children and adults. Our primary focus here is on how it impacts newborn children and pregnant women. Every year, there are 20-30 cases per 100,000 Americans. This condition impacts one in every 5,000 people over the course of their lifetime. An estimated 10% of those people will have a relapse at some point in their lives.

What is Bell's Palsy?

Bell's palsy, also known as facial palsy, is a temporary weakness in facial muscles which can cause your face to appear to droop. Usually, it only affects one side of the face, although in rare cases, it can affect both. Generally, victims have a decreasing ability to close their eye, facial droop, and then classically you would see a loss of function of the one side of their forehead.

This inflammatory condition involves a weakness or even full paralysis the seventh cranial nerve. The result is a lack of function of the branches of the seventh nerve. It may be viral, post-viral or vascular. The cause of Bell's palsy is largely unknown. Doctors treating patients with Bell's palsy often test for Lyme's disease and diabetes as patients with either of these conditions can be more susceptible to neurological disorders such as Bell's palsy.

The facial weakness usually reaches a maximum within twenty-four hours after onset. Patients may experience altered taste and hyperacusis, hypersensitivity to everyday sound, in the affected side's ear.

Bell's palsy is named after British surgeon Charles Bell who first wrote about the condition in 1821. The most famous case of Bell's palsy in recent history is Angela Jolie, who was diagnosed with the condition after her separation for Brad Pitt. Ms. Jolie's notoriety and her willingness to share her condition have done a lot of Bell's palsy awareness, as has this book.

Although the exact causes are unknown, it is believed to be a swelling of a nerve in the facial muscles. This can be caused by a viral or autoimmune infection. There is a hereditary link that increases the likelihood that you will get Bell's palsy.

There are several viruses that are linked to Bell's palsy. The most commonly thought virus to cause Bell's palsy is the herpes virus I which inflames the nerve. This is the same virus that can cause genital herpes and cold sores.

Bell's palsy due to the Herpes Simplex Virus (HSV-1) is due to the effects of the active virus. HSV-1 enters the nerve and travels through it. When the virus becomes active, the immune system produces antibodies to it, resulting in inflammation and swelling within the facial canal.

Other viruses though less likely that have been linked to Bell's palsy include chicken pox, shingles virus, Epstein-Barr virus, cytomegalovirus, mumps virus, influenza B and hand foot and mouth disease.

Who Does Bell's Palsy Affect?

Men and women are equally affected by Bell's palsy. Approximately 11-40 people are affected in every 100,000 people. Nearly 40,000 Americans are affected by Bell's palsy every year. This may be largely due to the fact that nearly 50% of Americans have herpes virus 1 or oral herpes. Pregnant women, people with diabetes, people with the flu or cold, high blood pressure, the elderly, and patients with hypothyroidism are at increased risk.

Pregnant women are at risk of Bell's palsy, on average, three times more than nonpregnant women. Doctors believe that the most likely cause of Bell's palsy in pregnant women is the Herpes virus. Bell's palsy could be very painful and dangerous for babies, as it is a form of paralysis or nerve damage. Doctors are reluctant to treat herpes virus during pregnancy as the viral medication may affect the baby as well however without treatment the baby might form paralysis. Severe cases of Bell's palsy in children may cause permanent vision damage and lead to partial or full blindness. It may also lead to hearing sensitivity and babies may experience increased sensitivity to loud noises.

There is no specific diagnosis for Bell's palsy. The doctor will examine a patient's face and make a diagnosis. They may ask you to close your eyes, raise your eyebrows, smile, and move different facial muscles to assess whether the facial muscles are working correctly. Bell's palsy accounts for 60 to 75% of all cases of facial drooping, inflammation, and paralysis. In babies, doctors will notice abnormal facial expressions, excessive drooling, and signs of pain and dizziness.

There are other diseases such as stroke and Lyme disease that may have similar symptoms as Bell's palsy and the doctor may ask the patient to have further tests done to see if another condition exists.

There are two tests that are commonly prescribed if the doctor cannot make a diagnosis from simply observing the patient's muscles alone.

These are the Electromyography (EMG) or an Image Scan such as an MRI or CT scan.

Electromyography (EMG): A EMG test confirms whether there has been nerve damage to the particular facial nerve and to what severity and depth the nerve damage is taken place. An EMG is an electrical measure of the muscle activity in response to stimulation. Electrical impulses are shot into the nerve and the EMG test determines how well the muscles respond to such stimulus.

Imaging scans: An MRI or magnetic resonance imaging scan is used to determine whether the patient has a tumor, a skull fracture, or something other that is causing the facial drooping or swelling. A CT or computerized tomography is also used in a similar way to help make a determination as to whether there is a different cause of nerve swelling. A CT scan is superior for bone detail at the skull base, whereas MRI excels in soft tissue detail.

Can Bell's Palsy be Cured?

Usually, in a mild case of Bell's palsy, symptoms will disappear within a month. With no treatment, the condition will resolve 90-95% of the time. Then, the first treatment option is steroids.

There are severe cases of Bell's palsy that need additional treatment. Symptoms can be permanent, including blindness in one eye, permanent nerve inflammation, dropping of the face, and abnormal re-growth of facial muscles. Most patients will recover from the condition or demonstrate considerable improvement within six months of diagnosis. If improvement does not occur or the symptoms are progressive, further investigation is warranted to exclude other diagnoses, the most worrisome of which is a tumor.

What Medications and Treatments are Used for Bell's Palsy?

The most commonly prescribed medications are steroids and antiviral drugs. Some studies show that antiviral drugs alone seem to have no effect, however when prescribed with steroids, seem to offer some treatment.

Prednisone which is a corticosteroid is a powerful anti-inflammatory agent. Studies show that prednisone works best when used as soon as possible and several days after the symptoms appear. In severe cases, sometimes the antiviral drug Valtrex is sometimes prescribed in combination with Prednisone to relieve the symptoms.

Physical therapy is also prescribed because facial nerves can become paralyzed if not moved. Rarely plastic surgery can be done to alleviate facial drooping. This is called decompression surgery. This type of surgery is not recommended by most doctors today as it can cause permanent facial nerve injury and permanent hearing loss. Occasionally, Botox is also used to relax the facial muscles although there can be several complications with the treatment if not performed correctly.