Even with all the obstetric complications and other things that can go wrong during pregnancy, auto accidents are one of the biggest single threats to a fetus. According to the U.S. National Library of Medicine, car accidents are the largest single cause of traumatic fetal injury and mortality. On this page, we will look at the common types of injuries and complications that can result when a pregnant woman is in an auto accident. 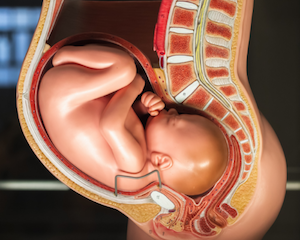 About 200,000 pregnant women are involved in a police-reported car accident every year in the U.S. Estimates suggest that between 1,500 and 5,000 fetal losses occur annually in the U.S. as a direct result of automotive accidents. This does not even include the other adverse outcomes because many children may incur permanent disabilities as a result of fetal trauma in a car accident. Below are some of the most common adverse results and pregnancy injuries that can result from auto accidents and harm the fetus.

The reason placental abruption is so common in auto accidents is that the sudden force of the impact experienced during an auto collision jerks the womb forward very rapidly inside the mother’s body. This force is more than enough to rip the placenta away from the uterine wall attachment. Placental abruptions can also be caused by compression of the mother’s abdomen against seat belts and steering wheels. Placental injury in car accidents is more likely in the later stages of pregnancy.

When placental abruption occurs in a car accident it is a serious medical emergency and a severe threat to the health and life of the fetus. The fetal death rate from a trauma-induced placental abruption is very high. When it occurs, it requires immediate medical intervention (often in the form of an emergency C-section) to avoid harm to the baby.

Uterine rupture is a rare obstetric event that occurs when the wall of the uterus literally tears or ruptures during pregnancy. Uterine rupture is one of the most dangerous of all pregnancy complications with the highest fetal mortality rate. Once the uterus ruptures, the baby will start rapidly losing all oxygen and must be delivered immediately to avoid permanent injury or death.

If a pregnant woman is badly injured in a car accident and her body may go into hypovolemic shock. This occurs when a large amount of blood volume is lost and the body compensates by reserve available blood for the most essential organs. If a pregnant mother goes into shock from a car accident the fetus will be at extreme risk. The fetal mortality rate when a mother experiences hypovolemic shock is over 80%.

Direct fetal trauma refers to cases where the fetus itself suffers physical injury as opposed to suffering indirect injury from harm to the mother. Direct fetal injury in an auto accident is not very common. Injury to the fetus directly is only reported in less than 10% of accidents involving pregnant women. This is mainly because the mother and her womb provide ample insulation and protection from the impact forces.

When direct fetal trauma does occur in an auto accident, it is usually some type of head injury resulting from impact with the steering wheel, airbag, or seatbelt. There have been cases of fetal death from head trauma caused by the force of the seat belt alone in auto accidents. The head of the fetus is most at risk during an accident because the position of the baby in the womb makes the head present the biggest target in an accident.

How to Keep Your Baby Safe When Driving

The most effective way to prevent harm to a baby during pregnancy is for pregnant women to avoid driving or being in a car as much as possible, especially as they get further along. When avoiding the car is not possible, there are certain things pregnant women can do to minimize the risk of harm in the event of an accident.

The most important thing to do is to wear a seatbelt. Although many pregnant women have concerns that the seatbelt will harm the baby in an accident, statistics show that wearing a seatbelt significantly reduces the likelihood of injury to the baby and the severity of any injuries.

Yes. Trauma from an auto accident is one of the leading causes of fetal death in the U.S. and can cause a number of other complications that can negatively impact your pregnancy and your baby.

How many pregnancies are lost due to auto accidents?

Can a fender bender cause a miscarriage during pregnancy?

A minor, low-impact auto accident (often called a “fender bender”) is not likely to cause a miscarriage or serious harm to a fetus during pregnancy, but it is possible. Placental abruption occurs in 5% of accidents that are classified as “low-impact” and this can result in fetal loss.

Can an airbag harm a fetus in an accident?

Yes. A deploying airbag can potentially impact a pregnant woman’s abdomen with significant force and cause harm to the fetus directly or indirectly. There have been reported cases of head trauma to the fetus and placental and uterine injury from airbags. However, the risk of injury is far greater without airbags.

Can a seatbelt harm a fetus in a car accident?

Yes. The impact of the seatbelt on the mother’s abdomen during a car accident can cause direct injury to the fetus as well as obstetric maternal injuries that can harm a fetus. However, statistics show that not wearing a seatbelt subject the fetus to significantly higher risks of more severe injuries.