During pregnancy, mother and fetus are connected by the placenta and umbilical cord. This system, which runs from the interior of the uterus to the fetus' bellybutton, allows for the vital transfer of materials to and from the developing baby.

About the Placenta and Umbilical Cord

Before we get into marginal and velamentous cord insertion complications, let's look at the placenta and the umbilical cord.

The placenta and umbilical cord are temporary organs, delivered along with the baby at birth, which allows for the transportation and exchange of materials between mother and fetus via blood vessels.

The umbilical cord is attached to the fetus at the bellybutton and consists of two arteries and a vein surrounded by protective tissue. It embeds itself into the center of the placenta which is in turn latched onto the interior of the mother's uterus. 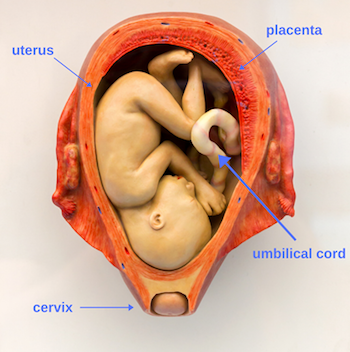 There are four kinds of cord insertions: marginal, velamentous, marginal, eccentric, and central. Central is normal. Eccentric, which is the lateral insertion of the umbilical cord >2 cm from the placental margin, is also not a grave concern.  The focus of our attention is on marginal and velamentous insertion with the latter causing a great level of angst. The causes of these complications are unclear.

In a velamentous cord insertion (VCI), the umbilical blood vessels insert into the amniotic sac instead of the placenta. This type of abnormal cord insertion is less common, occurring in only .5-2.4% of pregnancies, but also more dangerous due to its connection with vasa previa.

In velamentous insertion scenarios, the vessels of the umbilical cord are partially removed from their usual protective covering. Additionally, blood vessels run through part of the amniotic sac, the membrane that contains the fetus, instead of traveling directly from the umbilical cord to the placenta.

This increases the likelihood of vasa previa, a rare complication in which fetal blood vessels are contained within the part of the amniotic sac directly above the cervix. Vasa previa becomes dangerous when a mother goes into labor.

Vasa previa is detected by ultrasound, either as part of a routine checkup or when a mother complains of vaginal bleeding. An ultrasound device inserted into the vagina can see blood vessels present near the opening of the cervix.

If vasa previa is not diagnosed before vaginal delivery starts, there is a high likelihood of stillbirth. However, when diagnosed, doctors will closely monitor the pregnancy and schedule a c-section delivery, circumventing any risk of bleeding and producing a healthy baby.

Typically, marginal cord insertion has little negative effect. However, there is a high risk of hemorrhage, or blood loss, for infants with velamentous cord insertion because the umbilical blood vessels are unprotected by umbilical tissue.

In general, abnormal cord insertion can cause the placenta to develop abnormally. The growth - and the very life - of the fetus is dependent upon the health of the placenta. So there are major risks of adverse perinatal outcomes that include low birth weight, preterm delivery, hypoxia,  fetal growth restriction, stillbirth, the need for a C-section, and low Apgar scores. It can also cause high blood pressure, vascular compression, and thrombosis.

In addition to its link to vasa previa, there is a link between abnormal cord insertion and placenta previa, a condition in which the placenta attaches to the uterus close to or on top of the cervix, sometimes necessitating a c-section.

It is possible for the umbilical cord to be missing one of its two arteries, which makes abnormal cord insertion more likely. Mothers who are more advanced in age, smoke, or have chronic diseases such as diabetes are also at risk.

Often, abnormal cord insertion produces no symptoms. Vaginal bleeding during pregnancy and slow fetal heart rate, however, may indicate abnormalities in the umbilical cord and placenta. Blood from the fetus is darker in color since it's less oxygenated compared to the mother's blood.

During routine ultrasound checkups throughout pregnancy, doctors can see if the umbilical cord has inserted in the wrong location. Doppler imaging is also used. Doctors will look for signs of other potential issues, such as vasa previa and placenta previa, as a part of their diagnosis.

How is Abnormal Cord Insertion Treated?

Once a doctor detects that the umbilical cord has inserted in the wrong location, they will note the exact location of the insertion. In follow-up visits, the doctor will look to see if anything has changed. A marginal insertion could become a velamentous insertion over time, for example.

In some cases, the abnormal insertion corrects itself and is not severe enough to be of much concern. In other cases, like with persistent velamentous insertion, the doctor will schedule a c-section at around 37 weeks of pregnancy.

If for some reason an abnormal cord insertion went undetected, especially when accompanied by a condition like vasa previa, an emergency could arise during labor and delivery. At that point, the doctor may have to perform resuscitation and blood transfusions.

The point of insertion can be difficult to see on ultrasounds. However,  technologies to diagnose abnormal cord insertions exist and should be diligently utilized by doctors to monitor and prevent dangerous situations from arising during childbirth.

"Velamentous Cord Insertion in a Singleton Pregnancy: An Obscure Cause of Emergency Cesarean-A Case Report" by Juliana Rocha et al., Case Reports in Obstetrics and Gynecology, 2012. (This case study sought to determine whether prenatal detection of umbilical cord abnormalities yields safer deliveries. The researchers looked at a case involving a low-risk gestation. They found that the woman experienced a spontaneous membrane rupture nine hours after dilation. After 14 hours, the cardiotocography showed abnormal variable decelerations. The mother underwent an emergency C-section. A velamentous insertion was observed during the surgery. The baby girl was delivered with no complications. The researchers concluded that the prenatal detection of velamentous cord insertions improved obstetric management.)

"Examination of the Placenta" by Joseph Yetter, American Family Physician, 1998. (The article looks at the importance of examining the placenta in the delivery room. This means determining the placenta’s shape, size, consistency, and completeness. The healthcare providers should also look for accessory lobes, placental infarcts, hemorrhages, tumors, and nodules. They should also assess the umbilical cord for its length, the number of vessels, its insertion, knots, and the Wharton’s jelly presence. It concluded that the placenta should be pathologically evaluated if abnormalities were detected.)

"Second‐Trimester Ultrasound‐Measured Umbilical Cord Insertion–to–Placental Edge Distance: Determining an Outcome‐Based Threshold for Identifying Marginal Cord Insertions" by Ian R. Wax, et al., Journal of Ultrasound in Medicine, 2019. (This study looked at diagnostic criteria for marginal placenta cord insertions. The researchers looked at the ultrasounds of singleton pregnancies between 2012 and 2016. They used cord insertion-to-placental edge distances to create three patient groups and one comparison group. The researchers found that marginal placental cord insertions were associated with a cord insertion-to-placental edge distance of a centimeter or less.)